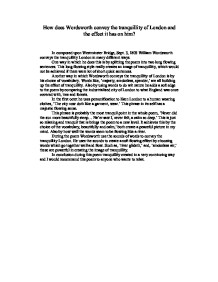 How does Wordsworth convey the tranquillity of London and the effect it has on him?

In the first octet he uses personification to liken London to a human wearing clothes, 'The city now doth like a garment, wear.' This phrase in its self has a majestic flowing sense. This phrase is probably the most tranquil point in the whole poem, 'Never did the sun more beautifully steep... Ne'er saw I, never felt, a calm so deep.' ...read more.

Also by how well the words seem to be flowing like a river. During the poem Wordsworth use the sounds of words to convey the tranquillity London. He uses the sounds to create a soft flowing effect by choosing words which go together well and flow. Such as, 'river glideth,' and, 'smokeless air,' these are powerful in creating the image of tranquillity. In conclusion during this poem tranquillity created in a very convincing way and I would recommend this poem to anyone who wants to relax. ...read more.