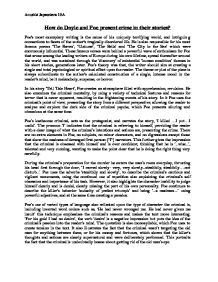 How Doyle and Poe represent crime in their stories

How do Doyle and Poe present crime in their stories? Poe's most exemplary writing is the cause of his uniquely terrifying world, and intriguing connections to facets of the author's tragically disordered life. He is also responsible for his most famous poems 'The Raven', 'Ulalume', 'The Bells' and 'The City in the Sea' which were enormously influential. These famous verses were behind a powerful wave of enthusiasm for Poe that arose among the leading writers of Europe during his own lifetime, spread thereafter around the world, and was sustained through the 'discovery' of existential 'human condition' themes in his short stories, generations later. Poe's theory was that, the writer should aim at creating a single and total psychological or spiritual effect upon the reader. The theme or plot of the piece is always subordinate to the author's calculated construction of a single, intense mood in the reader's mind, be it melancholy, suspense, or horror. In his story 'Tell Tale Heart', Poe creates an atmosphere filled with apprehension, revulsion. He also examines the criminal mentality, by using a variety of technical features and reasons for terror that is never apparent, resulting in the frightening events of his story. In it Poe uses the criminal's point of view, presenting the story from a different perspective, allowing the reader to analyze and explore the dark side of the criminal psyche, which Poe presents alluring and obnoxious at the same time. ...read more.

This is because he was obsessed in getting rid of the eye; he gets carried away with his task. Poe symbolizes the heart beat as the old man's life and also to the memory of the criminal and his increase in panic. Throughout the last paragraph, Poe adds tension using a number of exclamation marks and dashes creating suspense, and shows the increasing anxiety within the killer's thoughts. The exclamation marks 'Villains! ...no more! ...admit deed! - tear up the planks! ...here! Here! - ...hideous heart!!' explains that the criminal has spoken suddenly to express his anger and fury by yelling at the policemen for 'making...mockery of my horror'. It also adds tension and shows the increase of pace in his speech, as the killer's anxiety and nervousness increases, whilst he thinks that the policemen suspect him. Holmes was first created by Doyle in a story called 'A Study in Scarlet' published in 1887. Sherlock Holmes was based on Edgar Allan Poe's detective C. Auguste Dupin and Eugene Francois Vidoq, a former criminal who became chief of the Surete, Paris' police force. Holmes' physical appearance was that of Dr. Joseph Bell, Doyle's teacher from the University of Edinburgh. His surname came from Oliver Wendell Holmes, an American poet admired by Doyle. Within the timeline of the stories, Holmes lived in London at 221B Baker Street from approximately 1881 to 1903. ...read more.

Unlike Poe, Doyle's' uses of accurate descriptive language helps the reader to create a clear image of the story and what is occurring '...face drawn gray, with restless, frightened eyes, like those of some haunted animal...' describing the character. The adjectives 'restless' and 'frightened' describes the woman's state and gives the impression that she is terrified and agitated about what is concerning her. Similar to Poe, Doyle also includes personification, comparing the woman's eyes to '...some haunted animal...' using animal imagery, the adjective 'haunted' suggesting that the woman wore a worried and troubled expression. In general Poe presents crime, using repetition 'nervous-...dreadfully nervous' to intensify the reader whilst using short sentences adding tension 'He had never wronged me'. The long sentences include a lot of description, using several adjectives 'wise...audacity...', and information about his intentions and objectives. Similarly, Doyle uses the same method although he has a number of long sentences including subordinate clauses, plus a wide range of descriptive language and Victorian vocabulary, illuminating the intelligence and sophistication of Holmes and Watson. On the other hand, Poe also uses a variety of punctuation marks such as exclamation marks and dashes, 'Villains! ...no more! ...' creating tension, apprehension and explicates the killer's growing anger and anxiety. Although Doyle's story doesn't show a variety of punctuation marks, he has included formal language and dialogues between the characters and keeps the reader interested by giving clues to the investigation whilst Watson leads the reader through red herrings. ?? ?? ?? ?? Anushki Jayasekera 10A ...read more.