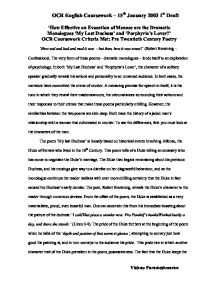 'How effective an evocation of menace are the dramatic monologues 'My Last Duchess' and 'Porphyria's Lover? ' - Pre twentieth century poetry.

'How Effective an Evocation of Menace are the Dramatic Monologues 'My Last Duchess' and 'Porphyria's Lover?' OCR Coursework Criteria Met: Pre Twentieth Century Poetry 'How sad and bad and mad it was - but then, how it was sweet!' (Robert Browning - Confessions). The very form of these poems - dramatic monologues - lends itself to an exploration of psychology. In both 'My Last Duchess' and 'Porphyria's Lover', the character of a solitary speaker gradually reveals his actions and personality to an unnamed audience. In both cases, the narrators have committed the crime of murder. A menacing premise for speech in itself, it is the tone in which they reveal their misdemeanours, the circumstances surrounding their actions and their responses to their crimes that make these poems particularly chilling. However, the similarities between the two poems are skin deep. Both trace the history of a jaded man's relationship with a woman that culminated in murder. To see the differences, first you must look at the characters of the men. The poem 'My last Duchess' is loosely based on historical events involving Alfonso, the Duke of Ferrara who lived in the 16th Century. This poem tells of a Duke telling an emissary who has come to negotiate the Duke's marriage. The Duke then begins reminiscing about his previous Duchess, and his musings give way to a diatribe on her disgraceful behaviour, and as the monologue continues the reader realizes with ever more chilling certainty that the Duke in fact caused the Duchess's early demise. The poet, Robert Browning, reveals the Duke's character to the reader through numerous devices. From the offset of the poem, the Duke is established as a very materialistic, proud, even boastful man. One can ascertain this from his immediate boasting about the picture of the duchess: 'I call/That piece a wonder now: Fra Pandolf's hands/Worked busily a day, and there she stands.' ...read more.

The motive for the Duke of Ferrara however is much more ambiguous. There are two main schools of thought on his motives, both equally sinister. The first possible motive is that the Duke wanted to marry the daughter of the Count for his 'well known munificence' and used her misdemeanours and promiscuity as an excuse to murder her. This is a particularly sinister evocation of menace because it shows just how morally bankrupt the Duke really is, as he can murder someone for something as fickle as money. After all, the Duke claims he is planning to marry out of love, but in mentioning the money he betrays his motive: 'The Count your master's known munificence Is ample warrant that no just pretence Of mine for dowry will be disallowed; Though his fair daughter's self, as I avowed At starting, is my object' (lines 49-53) The second motive is that the Duke's possessiveness just could not tolerate the promiscuity of the Duchess, and rather than putting his pride aside to tell her to stop, he chose to stop her altogether: 'E'en then would be some stooping ; and I choose/Never to stoop' Lines 42-43. One can ascertain that in death the Duke has ultimate control over her as a painting. This is an equally menacing premise as it shows the controlling aspect of the Duke's character, and his failure to understand his wife's character. This is the motive he puts forward to the envoy at the end of the poem, yet whether that was the Duke's true motive is debatable. When Fra Pandolf was hired to paint his Duchess, his sycophantic nature was taken seriously by the Duchess, and this enraged the Duke: '...such stuff/Was courtesy, she thought, and cause enough/For calling up that spot of joy' Lines 19-22. One aspect of the poetry that reveals an evocation of menace is the tone in which the speakers talk. ...read more.

Both of them are not racked with guilt as would be suspected, and even more surprising, both of them believe that they have done the right thing in murdering their partners. We can see this from the assertion at the end of 'Porphyria's Lover': '...And yet God has not said a word!' Line 60. We see this in the Duke in his smug tones when speaking to the envoy: 'She had/A heart - how shall I say? - too soon made glad,' Lines 21-22. The responses of both murderers are the most effective evocation of menace, as the warped morality of both men is both shocking and menacing. The idealness of the Duchess is evident through the description of her. Porphyria is not ideal though she does possess many admirable qualities. The Lover refers to her as 'perfectly pure and good.' Symbolically, we see her positive nature through her blazing up the 'cheerless grate' and making 'all the cottage warm' which both, cottage and grate, represent the Lover. From this we see that her only flaw is her inability to give herself fully to the Lover due to class and pride. Thus Browning leaves the reader with a greater ambivalence toward her. Through the differences he instils in the characters of the Duchess and Porphyria Browning changes the readers conception of the Duke and the Lover. One is horrified by both of their acts, but is much more tolerant of the dejected, hurt, even unstable Lover than of the snobbish and misogynistic Duke. The misguided nature and instability of the Lover lends him a more lenient conviction of evil. However, the evil demonstrated by the Duke of Ferrara is particularly convincing. Here one sees a morally bankrupt man who feels no guilt or shame after ordering his wives death, and readily moves to his next wife. This evocation of menace is particularly effective, and the convictions of evil in the Duke are extremely convincing. OCR English Coursework - 15th January 2003 1st Draft Vishnu Parameshwaran ...read more.