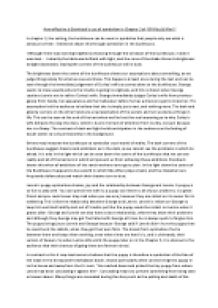 How effective is Steinbecks use of symbolism in Chapter 3 of Of Mice &amp; Men?

﻿How effective is Steinbeck?s use of symbolism in Chapter 3 of ?Of Mice & Men?? In chapter 3, the setting, the bunkhouse can be seen to symbolise that people only see what is obvious to them. Steinbeck shows this through symbolism in the bunkhouse. ?Although there was evening brightness showing through the windows of the bunkhouse, inside it was dusk? Instantly the table was brilliant with light, and the cone of the shade threw its brightness straight downward, leaving the corners of the bunkhouse still in dusk. The brightness down the centre of the bunkhouse shows our assumptions about something, as we judge things solely for what we see and know. This happens at least once during the text and can be seen through the immediate judgement of Curley's wife as comes alone to the bunkhouse. George seems to know exactly where the trouble is going to originate, and this is shown when George cautions Lennie not to talk to Curley's wife. ...read more.

Steinbeck shows this when all ambitions of the ranch workers never go to plan. In the light down the centre of the Bunkhouse It appears to be a world in which fate often plays a hand, and the characters are frequently defenceless and watch their dreams turn to dust. Lennie?s puppy symbolises dreams, joy and the relationship between George and Lennie. A puppy is so fun to play with. You can spend time with it; a puppy can listen to all of your problems, is a great friend and you could never stay mad when you see one; however they are reliant on its owner for its wellbeing. This is like the relationship between George and Lennie. Lennie is reliant on George to keep him well and healthy and out of trouble just like the puppy would be reliant on Lennie when it grows older. George and Lennie are also have a close relationship, where they share their problems and although they George may get frustrated with George at times he is always quick to forgive him. ...read more.

Many things are concealed during the story such as the petting and death of the mice, the incident in weed, the death of the puppy and briefly the death of Curley?s wife. We learn about the incident in weed in chapter 3 so it automatically foreshadows a doomed future of the puppy, given our knowledge about the mice. Our suspicions are confirmed During Chapter 5 when Lennie kills the puppy accidentally due to the fact that he still does not recognize his own strength. Although no other character can match Lennie?s physical strength, Lennie finds himself in a similar situation as the innocent animal, as Lennie is unaware of the vicious, predatory powers that surround him. This doom was foreshadowed by the puppy. The sequence of events of the puppy gives a cast contrast of scenes full of hope (when the puppy is first given to Lennie), in comparison to scenes of disappointment (when the puppy dies) increases the reader's apprehension as they are continuously on the edge wondering what he will do next. ...read more.