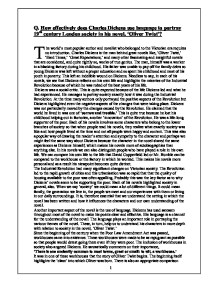 How effectively does Charles Dickens use language to portray 19th century London society in his novel, 'Oliver Twist'?

Q. How effectively does Charles Dickens use language to portray 19th century London society in his novel, 'Oliver Twist'? T he world's most popular author and novelist who belonged to the Victorian era requires no introduction. Charles Dickens is the man behind great novels like, 'Oliver Twist,' 'Hard Times,' 'Great Expectations,' and many other fascinating and insightful novels that are considered, and quite rightly so, works of true genius. The man, himself was a worker in a blacking factory during his childhood. His father was unable to pay off the family debts so young Dickens was left without a proper education and so spent his childhood and most of his youth in poverty. This left an indelible wound on Dickens. Needless to say, in each of his novels, we see that Dickens reflects on his own life and highlights the miseries of the Industrial Revolution because of which he was robed of the best years of his life. Dickens was a social critic. This is quite expected because of the life Dickens led and what he had experienced. He manages to portray society exactly how it was during the Industrial Revolution. At the time many authors only portrayed the positive aspects of the Revolution but Dickens highlighted even the negative aspects of the changes that were taking place. Dickens was not particularly moved by the changes caused by the Revolution. He claimed that the world he lived in was one of 'sorrow and trouble.' This is quite true because he lost his childhood helping out in factories, another 'innovation' of the Revolution. He was a life-long supporter of the poor. Each of his novels involves some characters who belong to the lower branches of society so that when people read his novels, they realize what exactly society was like and how people lived at the time and not all people were happy and content. ...read more.

We can see that the street on which the neat house was set is itself an indication to the kind of people that lived there. As we have already seen, the setting has also been used to describe the people that stay in that place. Mr. Brownlow's house was neat, orderly and so was he. This, as we have already seen is another way Dickens conveys to us the essence of society. For example we can compare Fagin's lair to Mr. Brownlow's house. For Fagin's lair the words, 'black,' 'filthy,' 'wretched,' have been used. As for Mr. Brownlow's house the words 'quiet,' 'neat,' 'orderly,' have been used. This even tells us of Mr. Brownlow's character. When we are first introduced to him, he is described as 'a very respectable looking personage, with a powdered head and gold spectacles.' This can be quite rightly compared to the way in which he likes his house to be kept. There are exceptions to the rule that all the characters of the people in the novel can be derived by understanding the places in which they stayed. Mr. Grimwig belonged to the upper class and might as well have stayed in comfortable surroundings but his attitude towards the orphans is negative. This makes him different from Mr. Brownlow and tells us a little more about the upper classes. Besides this, we also can see that the setting tells us immediately what part of the city, Mr. Brownlow lived in. We can see that he lived in the upper branches of society where the world of crime did not dare to break in, except in times of robbery. Mr. Bumble and Mrs. Mann represent the middle class people of the novel. They were assigned to 'take care' of the orphans and desolate at the workhouse. But as we have already seen, the people in the workhouse were not treated well at all. ...read more.

It was not completely unsuccessful. It did get them jobs in the factories but overall the society of that time was not the very best England has had. The novel is set in such a time when paupers were looked down upon and the upper classes wallowed in wealth. The depiction of society makes it possible for us, the readers, to understand the depth of the novel and of Dickens' ideas. It makes us aware of the characters that belong to the various sections of society. The descriptive style of the author is evident all throughout the novel. The life and times of the people Oliver Twist met has a great effect. It makes the reader learn more about the characters, their roles, and importance and of course about their everyday lives. Without even one character, the story would be incomplete. The setting aptly describes what Dickens has in mind for the next chapter so he prepares us for the impending action. As we have already seen the use of language has been brilliant in describing the society of London. It helps us imagine society and the characters. It has been creative to suit the reader as he moves along with the story and has also been quite effective at certain times because of its ability to draw sympathy. It tells us how the characters react to various circumstances and how they are influenced by society. Perhaps this is one of the reasons that the novel continues to remain an enduring classic. The society that has been depicted is of quite different from today. It was difficult adjusting to the workhouses, factories in the city but we finally manage to get tuned with Dickens' novel. It is one of the best books ever written. This is because it has a great reader appeal even two centuries later. It is because the description and the language used have helped the reader all throughout, so we do not feel stranded at any point. Dickens saw to it that his readers got the best of his work and we can't disagree after reading 'Oliver Twist.' 1 ...read more.