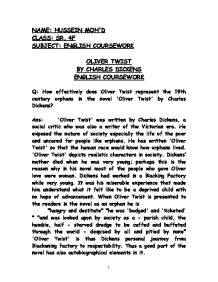 How effectively does Oliver Twist represent the 19th century orphans in the novel 'Oliver Twist' by Charles Dickens?

NAME: HUSSEIN MOH'D CLASS: SR. 4F SUBJECT: ENGLISH COURSEWORK OLIVER TWIST BY CHARLES DICKENS ENGLISH COURSEWORK Q: How effectively does Oliver Twist represent the 19th century orphans in the novel 'Oliver Twist' by Charles Dickens? Ans: 'Oliver Twist' was written by Charles Dickens, a social critic who was also a writer of the Victorian era. He exposed the nature of society especially the life of the poor and uncared for people like orphans. He has written 'Oliver Twist' so that the human race would know how orphans lived. 'Oliver Twist' depicts realistic characters in society. Dickens' mother died when he was very young; perhaps this is the reason why in his novel most of the people who gave Oliver love were woman. Dickens had worked in a Blacking Factory while very young. It was his miserable experience that made him understand what it felt like to be a deprived child with no hope of advancement. When Oliver Twist is presented to the readers in the novel as an orphan he is "hungry and destitute" "he was 'badged' and 'ticketed' " "and was looked upon by society as a - parish child, the humble, half - starved drudge to be cuffed and buffeted through the world - despised by all and pitied by none" 'Oliver Twist' is thus Dickens personal journey from Blackening factory to respectability. ...read more.

He held out the miserable bowl in which he is served thin gruel with the request "please sir I want some more" this is something unheard of. Oliver is considered as 'savage' and one who "is destined for the gallows". For his impertinence in daring to ask for more he is "sociably flogged as a public warning and example". The poor unfortunate starving wretch is considered as a criminal of the highest order whose punishment should serve as a reminder to all other wretched and starving orphans never to make such a mistake. The astounded response of the workhouse officials show that they took up Oliver's action of asking for more very seriously. Physical punishment was immediate "The master aimed a blow at Oliver's head with the ladle, pinioned him in his arms, and shrieked aloud for the beadle. Oliver was ordered into 'instant confinement', and a bill was next morning pasted on the outside of the gate, offering a reward of five pounds to anybody who would take Oliver Twist 'off the hands of the parish". The novel very effectively shows the humiliation and resentment that young Dickens felt when he was forced to work in the terrible conditions of the Warren Blacking Company. Dickens was a victim of child labor so was Oliver Twist and thousands of orphans like himself with Mr. ...read more.

My heart bleeds for them. I hate the people who abuse and discriminate others. I can't see other people and orphans being discriminated. In 'Oliver Twist' all of this is shown and it is shown perfectly. Oliver Twist represents all the 19th century orphans. He shows how orphans are treated and how all of them are discriminated. He is an important character as the whole story revolves around him to show to the readers what the orphans go through. I think that Charles Dickens has written a good book filled with love, sorrow, miseries, happiness, sadness and at last especially about an orphan named Oliver Twist. It is a great novel and attracts the readers' attention and heart towards the book. It is designed to appeal to the readers and students. It has got many surprises, secrets and revelations that all narratives contain. 'Oliver Twist' is a world-renowned book just because of its pure truth and how orphans are treated because people relate to the truth instead of to lies. This book is famous also because the boy who dares to ask for more gruel is Oliver and how he is treated because asking for more is not a sin so the readers want to know what will happen next in the life of Oliver which is filled with miseries. 'Oliver Twist' is an excellent novel to read to understand 19th century orphans. 1 ...read more.