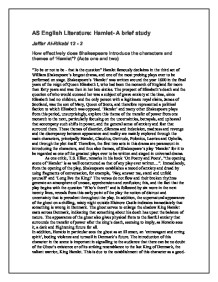 How effectively does Shakespeare introduce the characters and themes of 'Hamlet'?

AS English Literature: Hamlet- A brief study Jaffar Al-Rikabi 12 - 2 How effectively does Shakespeare introduce the characters and themes of 'Hamlet'? (Acts one and two) "To be or not to be - that is the question" Hamlet famously declaims in the third act of William Shakespeare's longest drama, and one of the most probing plays ever to be performed on stage. Shakespeare's 'Hamlet' was written around the year 1600 in the final years of the reign of Queen Elizabeth I, who had been the monarch of England for more than forty years and was then in her late sixties. The prospect of Elizabeth's death and the question of who would succeed her was a subject of grave anxiety at the time, since Elizabeth had no children, and the only person with a legitimate royal claim, James of Scotland, was the son of Mary, Queen of Scots, and therefore represented a political faction to which Elizabeth was opposed. 'Hamlet' and many other Shakespeare plays from this period, unsurprisingly, explore this theme of the transfer of power from one monarch to the next, particularly focusing on the uncertainties, betrayals, and upheaval that accompany such shifts in power, and the general sense of anxiety and fear that surround them. These themes of disorder, dilemma and indecision, madness and revenge and the discrepancy between appearance and reality are mainly explored through the main characters, principally Hamlet, Claudius, Gertrude, Polonius, Laertes and Ophelia, and through the plot itself. Therefore, the first two acts in this drama are paramount in introducing the characters, and thus also themes, of Shakespeare's play 'Hamlet' for it to be regarded as one of the greatest plays ever to be written and staged in universal drama. ...read more.

His seven soliloquies are all centred on the most important existential themes: the emptiness of existence, suicide, death, suffering, action, a fear of death which puts off the most momentous decisions, the fear of the beyond, the degradation of the flesh, the triumph of vice over virtue, the pride and hypocrisy of human beings, and the difficulty of acting under the weight of a thought 'which makes cowards of us all'. Thus, they probe his own situation, his mind and the problems attached to being human in a society characterised by duplicity and hypocrisy, and being an active agent in a moral universe. Hamlet's first soliloquy in Act one Scene 2 opens with the emphatic line: 'O that this too too sullied flesh would melt', a cry of anguish and a longing for dissolution, which is however followed by an acknowledgement of the fundamental Christian injunction against suicide, thereby precluding escape from the burden of life. This question of the moral validity of suicide in an unbearable painful world haunts the rest of the play, reaching the height of its urgency in perhaps the most famous line in all of English Literature: 'To be, or not to be- that is the question'. In this scene Hamlet mainly focuses on the appalling conditions of life, railing against Claudius's court as 'an unweeded garden/ That grows to seed. Things rank and gross in nature/ Posses it merely'. The listless tempo of the words 'How weary, stale, flat and unprofitable' conveys his weariness. The speech contrasts dramatically with Claudius's flowing lines as its verse starts and stops, punctuated by expressions of pain and confusion. ...read more.

While his introduction of Horatio and the ghost in the first scene is very important in establishing a mood of distress and anxiety, as well as touching on the themes of uncertainty and disorder, Shakespeare's following scene builds on that to a great extent through the contrast between Claudius and Hamlet, the conflict between appearance and reality and through Hamlet's first soliloquy of the play. In this soliloquy not only are Hamlet's true emotions revealed to the audience but with it many of the central themes and concepts of the play are explored, such as the concept of severe disillusionment leading to the idea that suicide is the only viable option. It is thoughts and emotions such as these that are gradually developed in the novel; and which has led to 'Hamlet' being regarded by many critics as the most powerful and probing play Shakespeare has ever written. The different interpretations of Hamlet and the play in general is only a natural consequence to the ambiguity and uncertainty that Shakespeare creates from very early on in his play. As one critic, John Dover Wilson remarks, 'Hamlet' is very much like 'a dramatic essay in mystery; that is to say, the more it is examined, the more there is to discover'. In that context, the first two acts of this drama have served not only as a very effective means of introducing the main characters and themes of the play, but also through the beautifully crafted soliloquies, Shakespeare probes the most daring aspects of the psychology of man and the history of human thinking through pieces of pure poetry, written in blank verse, sustained by a rhythm now smooth, now rugged, by a fast or a slow pace, offering his audience surprises in every line. ...read more.