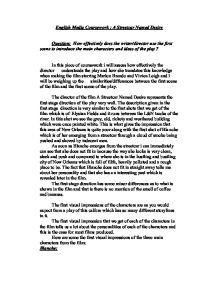 How effectively does the writer/director use the first scene to introduce the main characters and ideas of the play ?

English Media Coursework : A Streetcar Named Desire Question: How effectively does the writer/director use the first scene to introduce the main characters and ideas of the play ? In this piece of coursework i will assess how effectively the director understands the play and how she translates this knowledge when making the film starring Marlon Brando and Vivien Leigh and I will be weighing up the similarities/differences between the first scene of the film and the first scene of the play. The director of the film A Streetcar Named Desire represents the first stage direction of the play very well. The description given in the first stage direction is very similar to the first shots that we get of the film which is of Elysian Fields and it runs between the L&N tracks of the river. In this shot we see the grey, old, rickety and weathered building which were once painted white. This is what gives the impression that this area of New Orleans is quite poor along with the first shot of Blanche which is of her emerging from a streetcar through a cloud of smoke being pushed and shoved by indecent men. ...read more.

Stella often seems immature compared to Blanche because Blanche bosses her around a lot during the film and Stella asks Blanche for advice quite often. Blanche acts more like a mother to Stella than a Sister because Blanche appears so much more sophisticated than Stella during the film. Stella gets beaten up by Stanley quite a lot but Stella always seems to go back to Stanley like a boomerang. Stanley: Stanley is a bowling fanatic and the first visual impression we get of him is of him bowling with his mates down at the bowling alley. The first real Impression we get of Stanley is when him and Blanche are talking in Stanley and Stella's apartment. During Act1,Scene1 Stanley comes home in dirty, sweaty clothes and the first thing he does is have an alcoholic drink. Stanley is a well built man who gets into a lot of fights, this is a sign that he is quite a rough man. Stanley is a woman beater and he rapes Blanche later on during the film. When we first see Stanley in Act1, Scene1 i could definitely tell that something was going to happen between Blanche and Stanley because when Stanley first appears with Blanche ...read more.

The scene ends with Blanche re-living her husbands suicide. At this point polka music comes on and Blanche's actions are the main focus of the camera. The finale of the scene is caused by sound effects which are of a gun going off and by the polka music slowly being faded out. In conclusion the first seen is brilliant for portraying the characters and for portraying the main storylines in the play. In this first scene we see most aspects of the main Character's personalities. In the rest of the film all that happens is that the storylines seen in the first scene develop in more depth. In my view the first scene really sets the scene for the whole film because it gives you a hint in the first scene about nearly everything that happens in the play. The director done a good job in understanding what was happening in the play and she done a good job when translating the play to a film and most of the important aspects staying the same and by using music and camera shots to get that added affect that makes the film so affective and understanding in the point of view of the audience. ...read more.