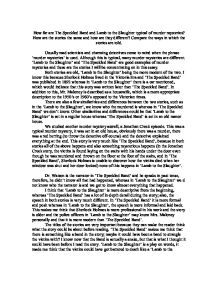 How far are The Speckled Band and Lamb to the Slaughter typical of murder mysteries? How are the stories the same and how are they different? Compare the ways in which the stories are told.

I know now that the Band is actually a snake, but that is what I thought it could have been before I read the story. 'Lamb to the Slaughter' is a play on words, it made me think that the victim could have got battered to death like a 'Lamb to the Slaughter', although Mrs. Maloney killed her husband by hitting him over the head with a leg of lamb, hence 'Lamb to the Slaughter'. Mrs. Mary Maloney is the murderer in 'Lamb to the Slaughter' she seems to be a very quiet lady who loves her husband dearly. Not really the type of person to kill anyone. Dr. Roylott of Stoke Moran, however, seems to be a very ill mannered man with a very short fuse. He seems to be a blatant murderer, you can tell this because he storms into Sherlock Holmes's home and speaks very rudely to him and Mrs. Maloney sits at her house watching the clock for her beloved husband to come home. I think Sir Arthur Conan Doyle wanted the reader to think that Dr. Roylott was such an obvious murderer that he couldn't possibly be the killer, when in fact, he was. I also think that Roald Dahl wanted the reader to feel sorry for Mrs. ...read more.

I think that the atmosphere in Mary Maloney's house would be one of warmth and happiness, whereas in Stoke Moran it seems cold and unwelcoming. From the two descriptions I would expect that evil deeds would be more likely to occur in Stoke Moran. Sir Arthur Conan Doyle cleverly describes Stoke Moran as having two curving wings, like the 'claws of a crab', which does not bring to mind a small or angular house. Although the description of Mary Maloney's house is brief you feel that the house is relatively small and compact, with all the necessary needs, such as ice cubes, slippers and whiskey. Both houses aren't very similar at all since one seems large and and the other seems small and welcoming. Holmes' final comment in 'The Speckled Band' leaves you believing that Dr. Grimesby Roylott deserved everything he received and that Holmes felt no responsibility for his death. In this respect the author passed judgement. Mary Maloney's giggling leaves you thinking she believes she has got away with it, there is no evidence that the author is passing judgement. Over the last hundred years I think that murder mysteries and thrilling tales have become more gory and graphic. Instead of a stereotypical story, anything could happen in modern stories. I also think attitudes towards murder have changed over the last century aswell. Back in Victorian times, no one would suspect a teenager of murder, now a teenager would most probably be the first suspect. ...read more.