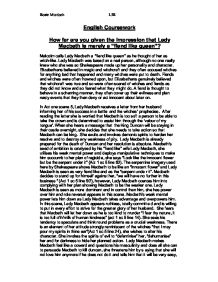 How far are you given the impression that Lady Macbeth is merely a &quot;fiend like queen&quot;?

English Coursework How far are you given the impression that Lady Macbeth is merely a "fiend like queen"? Malcolm calls Lady Macbeth a "fiend like queen" as he thought of her as witch-like. Lady Macbeth was based on a real person, although no one really knew who she was so Shakespeare made up her personality and character. Elizabethans believed in magic and witchcraft and they often accused witches for anything bad that happened and many witches were put to death. Fiends and witches were often frowned upon, but Elizabethans genuinely believed that witchcraft was true and so were often scared of witches and fiends as they did not know and so feared what they might do. A fiend is thought to behave in a scheming manner, they often cover up their evilness and plan nasty events that they then deny or act innocent about later on. In Act one scene 5, Lady Macbeth receives a letter from her husband informing her of his success in a battle and the witches' prophecies. After reading the letter she is worried that Macbeth is too soft a person to be able to take the crown and is determined to assist him through the 'valour of my tongue'. When she hears a message that the King Duncan will be staying in their castle overnight, she decides that she needs to take action so that Macbeth can be king. She exults and invokes demonic spirits to harden her resolve and to destroy any weakness of pity. Lady Macbeth is already prepared for the death of Duncan and her resolution is absolute. Macbeth's seed of ambition is catalysed by his "fiend like" wife Lady Macbeth, she utilises his weak mental power and deploys manipulative techniques to make him succumb to her plan of regicide, she says "Look like the innocent flower but be the serpent under it" (Act 1 sc 5 line 62). ...read more.

She says that she would have been able to commit the murder herself if it wasn't for the fact that Duncan was sleeping which reminded her of her father. It is clear that she was very close to her father maybe causing her to have some masculine qualities about her. Her readiness of mind and strength of purpose compensates for the way Macbeth behaves and fails to do what was asked of him. This remorse shown by Macbeth does demonstrate his still active conscience however, it is quelled by Lady Macbeth when she says "These deeds must not be thought after it will make us mad"(act 2 scene 2 line 67). This realistic statement means Macbeth cannot now emancipate him from this downward cycle he has embarked on the road to ultimate failure and now must succumb to his ambition. It is ironic that Lady Macbeth imagines that washing the blood of ones hands will free the guilt that is in ones mind, however, it is she who finally is able to come to terms with this theory and is unable to wash her hands clean. Her harsh comment towards Macbeth "infirm of purpose!" comes back to haunt her, as he strengthens in evil resolve, she becomes madly suicidal - anticipated in her dismissive comment "so, it will make us mad". In Act 2 scene 3, the news is discussed. Lady Macbeth faints, and it is not clear why she appears to do so. Women in that day knew how to faint very well at exactly the right time in order to get out of an unpleasant situation, such as when a male expressed a vulgarity in her presence, people would not necessarily believe that her faint was more than just a public gesture. Another way of looking at it is that Macbeth had just made a big mistake, and in order to help him by distracting the attention away from him onto her, she faints. ...read more.

The audience get a very different view of her in this scene than that of Act 1 scene 5, the final feeling is to feel sorry for her and to not base her on her fiend like personality, but on the vulnerable one instead. If this scene was left out, the audience would remember Lady Macbeth as being cold blooded and fiendish, this part of the play shows her weak, powerless side and it shows that she hides her true feelings. The phrase that Shakespeare uses to describe Lady Macbeth - as merely a "fiend-like queen" is a completely biased and partisan comment. The fact that at the end of the play Lady Macbeth commits suicide, makes too unfair to deploy such a critical description. It shows that Shakespeare did not want Lady Macbeth to seem just as a "fiend like queen" but as a person with other redeeming features and with other emotions and feelings. As the play continues, the strong dominant character we once saw eventually embers out and she eventually commits suicide, however at this point she is not at all influential to Macbeth. Her un-fiend like legacy is summed up by Macbeth's cold statement saying "she should have did here after there would have been time for a word". This is an un-fiend-like end and it would not be expected if she was judged on her previous actions. It also shows that Lady Macbeth's conscience is far too strong for her to be labelled as malevolent and fiend-like. It is obvious that the sleep walking scene was put in to show a less evil and fiendish side to her, that she is perhaps weaker than her husband which seems absurd to suggest when we see her in Act 1 scene 5, and to show that she hides her true feelings. Lady Macbeth is also so intricate that it is hard to describe her whole character in one line so Shakespeare uses the metaphor 'fiend like queen'. ?? ?? ?? ?? Rosie Murdoch L5R ...read more.