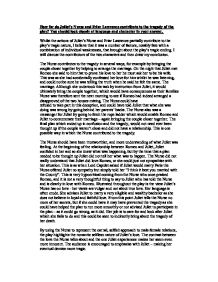 How far do Juliet's Nurse and Friar Lawrence contribute to the tragedy of the play?

How far do Juliet's Nurse and Friar Lawrence contribute to the tragedy of the play? You should look closely at language and character in your answer. Whilst the actions of Juliet's Nurse and Friar Lawrence partially contribute to the play's tragic nature, I believe that it was a number of factors, notably fate with a combination of individual weaknesses, that brought about the play's tragic ending. I will discuss the contributors of the two characters and then draw my conclusion. The Nurse contributes to the tragedy in several ways, for example by bringing the couple closer together by helping to arrange the marriage. On the night that Juliet met Romeo she said to him that to prove his love to her he must ask her to be his wife. This was as she had accidentally confessed her love for him whilst he was listening, and could not be sure he was telling the truth when he said he felt the same. The marriage. Although she undertook this task by instruction from Juliet, it would ultimately bring the couple together, which would have consequences as their families Nurse was therefore sent the next morning to see if Romeo had indeed arranged a disapproved of the two houses mixing. The Nurse could have refused to take part in this deception, and could have told Juliet that what she was doing was wrong by going behind her parents' backs. The Nurse also was a messenger for Juliet by going to fetch the rope ladder which would enable Romeo and Juliet to consummate their marriage - again bringing the couple closer together. ...read more.

So he thought up the plan where Juliet would take the potion and her family would think she were dead, and she would wake in the tomb where Romeo would find her and they would escape. His plan seemed well thought out, and would have worked if the message had got to Romeo informing him of the plan. However this was the main flaw in it all - it didn't get to Romeo so the whole thing fell apart. Friar Lawrence had told Romeo to look out for a message from Balthasar, but Friar Lawrence decided to send Friar John to tell Romeo the details of the plan. This caused a number of problems. Firstly Friar John could not successfully send the letter of explanation due to a plague, which meant he could not go outside. Therefore Balthasar got to Romeo quicker with the news that Juliet was dead, rather than just unconscious as part of the plan. As Romeo was looking out for Balthasar due to what Friar Lawrence had said, he would be pretty sure that what Balthasar was to say would be true. This is why he didn't think twice that it could be a mistake or part of a plan when he heard the news. And it was this news that he acted upon which caused the eventual tragic end to the story. If Friar Lawrence had told Romeo beforehand that he would send Friar John, when Balthasar came with the news of Juliet's apparent death, there would have been a possibility that Romeo would have realised it was part of a plan. ...read more.

Both families lost something very important to them and if the families would have stopped feuding then their children would have still been alive. Tybalt as an individual can also be seen to contribute to the final tragedy. From the beginning of the play he is portrayed as an argumentative character and is very strongly anti-Montague. He triggers a fight at the beginning with Benvolio, and goes on to cause trouble and wants to fight Romeo after seeing him at the Capulet party. Then when Tybalt sees the Montagues then in the streets of Verona, Tybalt insults Romeo and is eager to fight him. Then with Mercutio sticking up for Romeo, he ends up in a fight with Tybalt and in his attempts to break up this fight Romeo accidentally causes Mercutio to be fatally wounded. Romeo in a state of despair and anger, furiously kills Tybalt leading to his banishment. It was due to this banishment that a plan was needed to keep Romeo and Juliet together. And so if Tybalt had not been so aggressive and hateful Romeo would have not felt the need to kill him, and so would not have been banished. Therefore I think that he partly contributed to the final tragedy. To conclude, I think that Juliet's Nurse and Friar Lawrence do contribute a fair amount to the tragedy, especially the Friar, but I think that it came about due to a number of factors. I believe that it was mainly fate combined with individual weaknesses - of the Friar, Juliet's Nurse and Tybalt - which helped fate take its unfortunate course ultimately just to end the ancient feud. ...read more.