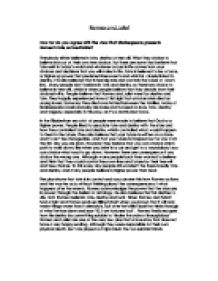 How far do you agree with the view that Shakespeare presents Romeos fate as inevitable?

Romeo and Juliet How far do you agree with the view that Shakespeare presents Romeo's fate as inevitable? Everybody either believes in fate, destiny or free will. What they choice to believe in is out of their own free choice. But there are some that believe that fate exist in today's world and whatever occurs in life comes from your choices and decisions that you will make in life. Fate is believed to be a force, or higher up power that predetermines events and which is closely linked to destiny. It is also believed that is has big role and controls the future of one's live. Many people don't believe in fate and destiny, so therefore choice to believe in free will, which is when people believe that they decide from their choices in life. People believe that Romeo and Juliet meet by destiny and fate. They happily experienced love at first sight but unfortunately died as young lovers. Some say they died over hatred between the families. Many of Shakespeare novels and play are base and focused on love, fate, destiny and tragedy, especially in this play, as it's a dominated force. ...read more.

Romeo finally escapes from his destiny by committing suicide to "shake the yoke of inauspicious" Romeo and Juliet are one of the very few play that a love story that does not have a very happy ending. Although they were responsible for their own physical death, but fate played a major role in the two suicidal minds. I think from the beginning Shakespeare wants us to think that Romeo fate is predetermined, and that fate can't be changed, by including the prologue. The prologue basically gives the audience a clue of what will happen and gives away the plot and the ending. And that's why I think that Shakespeare includes it in Romeo and Juliet. The prologue also tells us about Romeo and his fate. Shakespeare uses dramatic irony to give the audience an advantage and to let them know what's going on more than the other characters. Shakespeare yet again uses the prologue to give us an inside clue, while the characters have no idea on the events that will occur. By the audience knowing the plot, it creates suspense and irony. ...read more.

Romeo and Juliet is a tragedy, and it follows the rules of the Greek tragedies. Romeo is the tragic hero, and his tragic flaw is that he does things too quickly, and doesn't think before he acts and his consequences of his actions. Right from the start of the play the prologue says Romeo and Juliet are doomed to die. Shakespeare uses the Friar to warn Romeo about the dangers of his behaviour, and actions. He says "Wisely and slow, they do stumble that run fast". I think Shakespeare uses this to warn Romeo and the audience that Romeo's fate is inevitable because of his tragic flaw. In the play the sequences of events that occurs, that lead up to the deaths of Romeo and Juliet, can be seem as just bad luck. Even through Romeo and Juliet are such old stories, and still so famous to this very day is because some of the themes, such as; fate, destiny and free will, is still being seen as relevant to people today, as the mysteries of life and the universe and God is still questions we ask ourselves today. I conclusion, I fully agree with the view that Shakespeare presents Romeo and Juliet as fate as in evitable... ...read more.

This is a good response with many interesting points being made although these can be developed further. There is good use of technical language throughout as well as quotations that are appropriate and embedded within the text. The essay has a good structure and topic sentences are generally very good and support the points being made. The essay would benefit further from the following: 1. Proof-reading, 2. Removing repetition, 3. Developing some of the points made.