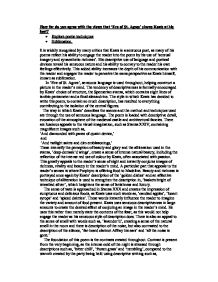 How far do you agree with the views that 'Eve of St. Agnes' shows Keats at his best?

How far do you agree with the views that 'Eve of St. Agnes' shows Keats at his best? * Explore poetic techniques * Sublimation. It is widely recognised by many critics that Keats is a sensuous poet, as many of his poems reflect his ability to engage the reader into the poem by his use of 'sensual imagery and synaesthetic richness'. His descriptive use of language and poetical devices reveal his sensuous nature and his ability to convey to the reader his own feelings effectively. This added ability increases the depth of his communication with the reader and engages the reader to perceive the same perspective as Keats himself, known as sublimation. In 'Eve of St. Agnes', sensuous language is used throughout, helping construct a picture in the reader's mind. The tendency of descriptiveness is formally encouraged by Keats' choice of structure, the Spenserian stanza, which contains eight lines of iambic pentameter and a final alexandrine. The style in which Keats has decided to write this poem, to contain so much description, has resulted to everything contributing to the isolation of the central figures. The way in which Keats' describes the scenes and the method and techniques used are through the use of sensuous language. The poem is loaded with descriptive detail, evocation of the atmosphere of the medieval castle and architectural fancies. ...read more.

The immediate sense of coldness results in the reader feeling uncomfortable but this soon strongly contrasts with the brilliantly illuminated interior where revelry is about to commence, which is appealing to the reader and therefore helps the reader feel more at ease. Later on, the coldness is also contrasted with the warmth created in Porphyro's heart, due to his admiration towards Madeline, 'with heart on fire for Madeline.' Even further on in the poem, cold is once again used as a contrast, to the sumptuous offerings to Madeline, whose description 'carries association of warmth' containing modifiers such as, 'glowing', 'golden' and 'sumptuous'. Another contrast included in the poem is the binary opposition created between the old age of the Beadsman and Beldame and the youth of Porphyro and Madeline. At the end of the poem the two lovers flee to a 'new life', yet the Beadsman and Angela the Beldame were linked to death from their first introductions, 'already had his death bell rung' and she was 'weak in body and in soul'. There are many more contrasts in the poem, all contributing to Keats' ability to involve the reader in his portrayal of the story. More contrasts that have been acknowledged by many critics are; the noise and revelry of the feasters in the castle, against the calm and quiet of Madeline's room; the snarling trumpets which welcome the guests against the tender chords of the lutes; the contrast of dream and reality; the Beldame's fear and panic of being found is contrasted against the relaxed attitude of Porphyro's in Stanza XI. ...read more.

In the 'Twentieth Century Interpretation of Keats' Odes', Jack Stillinger believes that many of Keats' poems "begin in the real world, take off in mental flight to visit the ideal but finds something wanting in the imagined ideal, so returns home to the real but has acquired a better understanding and attitude from the experience of flight." I can identify with Stillinger's belief in the case of 'Eve of St. Agnes', as the concluding stanza can be seen to puncture the world of make believe distancing the reader form events, as it the leaving of the lovers is not a flight into a glamorous never-never land, but a step into the coldly real. It is also argued that a distance has always been subtly maintained throughout the poem by the narrator's tone, creating a tension between scepticism and the will to believe, between dream and reality, the spiritual and the physical and the ambiguous nature of love. I believe that due to the extensive range of poetic techniques used throughout this poem and Keats' ability to use sublimation, influencing the reader's perception of the situation, this poem is a fine example of Keats at his best. Keats recognises the importance of the imagination and emphasises the contrast, that although the imagination can 'create an escape from reality', it may also 'aid the imaginative vision to transcend the human condition'. ...read more.