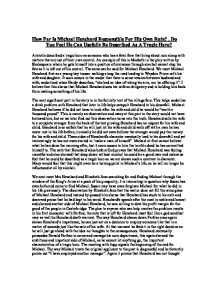 How Far Is Michael Henchard Responsible For His Own Ruin? , Do You Feel He Can Usefully Be Described As A Tragic Hero?

How Far Is Michael Henchard Responsible For His Own Ruin? , Do You Feel He Can Usefully Be Described As A Tragic Hero? Aristotle described a tragic hero as someone who has a fatal flaw that bring about ruin along with matters that are out of their own control. An example of this is Macbeth in the play written by Shakespeare where he gets himself into a position of eminence through sins but cannot stop his fate as it is left out of his control. The same can be said for Michael Henchard. We meet Michael Henchard first as a young hay trusser walking along the road leading to Weydon Priors with his wife and daughter. It soon occurs to the reader that there is some tension between husband and wife, underlined when Hardy describes, "she had no idea of taking his arm, nor he offering it". I believe that this shows that Michael Henchard sees his wife as obligatory and is holding him back from making something of his life. The next significant part in the story is in the ferimity tent of the village fare. This helps underline a drink problem with Henchard that later in life helps catapult Henchard to his downfall. Michael Henchard believes if he did not have to look after his wife and child he would be "worth a thousand pound". This is merely an observation and many at this part in the story would not have believed him, but as we later find out this observation turns into the truth. Henchard sells his wife to a complete stranger from the back of the tent proving Henchard has no respect for his wife and child. Henchard is so selfish that he will just let his wife and child walk off with a man he has never met in his life before, ironically he did not even believe the stranger would pay the money for his wife and child. ...read more.

In this invincibility he feels he does not have to see Lucettta and can just neglect her until she comes running, this proves to be a mistake and a fatal flaw in his invincibility. This leaves the door open for Donald and he takes his chance with open arms by dropping hints like "maybe you'll be very lonely". When eventually Michael does turn up he expects Lucetta to drop everything and run to his call "I've called to say that I am ready". When she does not he gets rude, arrogant and impatient with statements like "This stint of reciprocal feeling". This is a horrible side of Henchard's character and the invincibility he feels he had at that point in the story has just drained away. The meeting with all four of them for afternoon tea again brings out the inferior side of Henchard as he is determined to drive Lucetta into an early grave by dropping a variety of remarks about their time together in Jersey. The employment of Jopp again is another major mistake and a catapult for Henchard's downfall as Jopp still has the way he was treated before by Henchard at the forefront of his mind. This was again na�ve on Henchard's part as he should have realised that Jopp would have wanted revenge. Determined too get the better of Donald, Henchard visits the weatherman, this is again is an elementary mistake to make, as it is in the cycle of life that if you want something to happen so badly, it won't. Henchard believes the weatherman and shows hastiness as he stakes his whole business on it, also showing a hint of desperation that getting the better of Farfrae is some obsession. Henchard after selling in a depressed market gets the feeling that nothing can go right for him after it turns out to be a good harvest after all. ...read more.

The discussion between Henchard and the market trader proves to be a demoralising experience as he is told of the marriage "Surely they said there was a wedding coming off soon." This proving Henchard's suspicions. The arrival of Henchard back in Casterbridge proves that Henchard feels he has been left out. He is greeted only to be insulted by Elizabeth Jane when she refers to him as "Mr Henchard" proving that she has no real feelings for him after the way he has treated her in the past and it is understandable that she refers to him the way she did. Although it must have annoyed Henchard as he replies, "Call me worthless old Henchard" underlining that he does not believe he should be treated in that way. The fact that Donald and Elizabeth show that they still have some feelings for him even though he has treated the pair of them so badly in the past. The will that Henchard leaves proves to the reader that he realises what an appalling live he has lived especially the way he has treated his friends, members of his family, and workforce as he writes "may no man remember me". This underlines the fact that he just wants to be forgotten and makes sure that everyone leaves him in the past. This is the one thing Michael can actually see and realise that he has not treated people with respect and he deserved to die alone with "no mourners ......at my funeral". I feel Henchard can be described as a tragic hero as he fits the frame for my description earlier on. He have two vital flaws in his character, hastiness and naivete, which eventually lead to his downfall from prominence. The other factor is hastiness for example when things are out of the person's control and in this case when the bad weather occurred around the harvest time. By showing no self-control and being so hasty it turned out to be obvious that Henchard's fall was going to be fast and dramatic making him the perfect character to base a story around. ...read more.