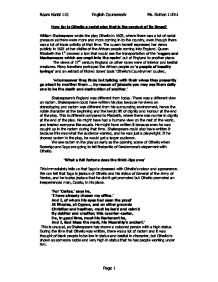 How far is Othello a racist play that is the product of its times? William Shakespeare wrote the play Othello in 1603, where there was a lot of racial pressure

How far is Othello a racist play that is the product of its times? William Shakespeare wrote the play Othello in 1603, where there was a lot of racial pressure as there were more and more coming in to the country, even though there was a lot of trade activity at that time. The queen herself expressed her views publicly in 1601 at her dislike of the African people coming into England. Queen Elizabeth the 1st decreed a law that would see the transportation of the 'negars and blackamoors which are crept into the realm' out of England to another place. The views of 17th century England on other races were of inferior and bestial creatures. Many travellers portrayed the African people as 'a people of beastly lyvinge' and an extract of Eldred Jones' book 'Othello's Countrymen' quoted, 'whomsoever they finde but talking with their wives they presently go about to murther them ... by reason of jalousie you may see them daily one to be the death and destruction of another.' Shakespeare's England was different from today. There was a different view on racism. Shakespeare could have written his play because he views on stereotyping and racism was different from his surrounding environment, hence the noble character at the beginning and the heroic lift of dignity and honour at the end of the play. ...read more.

'... An old black ram Is tupping your white ewe.' This quote shows us what is going on in Iago's mind. It tells us that he is very crude in thought as well as very racist. This is elaborated in his dialogue with Brabantio in the same scene. Iago tells Brabantio that he had better hurry and find his daughter, 'Or else the devil will make a grandsire of you.' The devil in this quote is symbolised by Othello, as many people during the time the play was written thought the devil to be black. This is seen again in Act 5 Scene 2, where Emilia finds out that Desdemona has been killed and tells Othello the truth. 'O, the more angel she, And you the blacker devil!' For the audience, being black meant being sinful, or the villain. The hero was always the knight in shining white armour. However, in Act One Scene Two, Shakespeare uses his language to show the audience a totally different view of Othello compared to Scene One where he is shown as a beast who has no control over his desires. Here Othello is shown as noble, fair and righteous. ...read more.

As with most of Shakespeare's tragedies, Othello rises in status briefly before falling again and committing suicide. When he finds out that Desdemona was innocent, he regains his fallen honour and then commits suicide. This is what the audience deemed a good ending; the black person is made into a fool so gives up and commits suicide. The racism is captured in the play to appease the audience of those times, but in these times, it is frowned upon. When Shakespeare was writing the play, it was alright for racism to be evident in the script, but is not suitable for today. The play and how it was written was very strongly influenced by the environment in which it was written. Had it been written today, there would not be so much racism in the play. Today there are pressure groups who can protest and show their views publicly, but in 17th century England, there was no such thing. If a black person expressed his views, he would almost immediately be punished, harder than was necessary. Therefore, no one complained about the amount of racism in the play, but was almost welcomed by the audience. This play was a product of the racism of its times. ?? ?? ?? ?? Raam Kanbi 11S English Coursework Ms. Button 11En1 Page 1 ...read more.