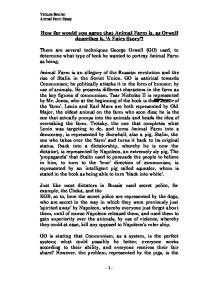 How far would you agree that Animal Farm is, as Orwell describes it, A Fairy Story(TM)?

How far would you agree that Animal Farm is, as Orwell describes it, 'A Fairy Story'? There are several techniques George Orwell (GO) used, to determine what type of book he wanted to portray Animal Farm as being. Animal Farm is an allegory of the Russian revolution and the rise of Stalin in the Soviet Union. GO is satirical towards Communism; he politically attacks it in the form of humour, by use of animals. He presents different characters in the farm as the key figures of communism. Tsar Nicholas II is represented by Mr. Jones, who at the beginning of the book is the dictator of the 'farm'. Lenin and Karl Marx are both represented by Old Major, the oldest animal on the farm who soon dies; he is the one that actually pumps into the animals and heads the idea of overtaking the farm. Trotsky, the one that completes what Lenin was targeting to do, and turns Animal Farm into a democracy, is represented by Snowball, also a pig. Stalin, the one who takes over the 'farm' and turns it back to its original status, (back into a dictatorship, whereby he is now the dictator), is represented by Napoleon, an extremely sly pig. The 'propaganda' that Stalin used to persuade the people to believe in him, to turn to the 'true' direction of communism, is represented by an intelligent pig called squealer, whom is stated in the book as being able to turn 'black into white'. ...read more.

* There is use of a chorus - 'I'll huff, and I'll puff, and I'll blow your house down. * There are moral dimensions, whereby the two lazy pigs get their house blown down by the wolf, and need to run to the pig that wasn't lazy. This blatantly states to those children that would read it, those who are lazy do not succeed, and those who work hard do succeed. * Also the moral lines are consistently drawn. There is no doubt to the mind as to who the villain is and who the good are. In this case, the villain being the wolf, and the good being the three little pigs. * And most importantly, there is a happy ending. The story ends that the villain, the wolf, ends up falling into a burning pot of hot water, and the good ones, the pigs, end up living happily ever after. To a certain degree, I agree GO is right in stating that Animal Farm is 'a fairy story' as it does consist of several of the above characteristics. In Animal Farm, there are talking animals. It is also on a rural setting, hence the name 'Animal Farm'. There is also comedy and humour, for example when the pigs vote twice. There is also childlike language, for example on pages 38-39, where firstly, there is a stage-by-stage account, there is use of short ...read more.

The last expected necessity for a fairy story, missing from Animal Farm, is that the moral lines are not consistently drawn. There is severe doubt as to who the villain is, and who the good is. At the beginning of the book, Mr. Jones is viewed as the villain. Once the animals take over the farm, Mr Jones is still the villain, as are the neighbouring farmers who attempt to reclaim the farm for Mr Jones, for example at 'The Battle of the Cowshed'. Once Napoleon takes over, from the audience point of view, which is the genuine point of view, Napoleon is now the villain, however from the animals' disorientated and erroneous point of view, which they were deceived into believing, Snowball is now the villain, whereas we as the audience know, he always was good. In conclusion, on the one hand, GO was correct in calling Animal Farm 'A fairy story' since it does consist of several, if not the majority of characteristics that are expected to be used to construct a fairy story, for example the fact that the animals can talk, there is use of childlike language, and there is use of choruses etc. However, the characteristics missing from Animal Farm in value terms, significantly outweighs those that it does consist of. I think GO was not completely justified to call Animal Farm 'A fairy story'. ?? ?? ?? ?? Yehuda fletcher Animal Farm Essay - 1 - ...read more.