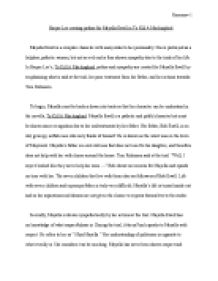 The seven children that live with them also are followers of Bob Ewell. Life with seven children and a grumpy father is truly very difficult; Mayella?s life is turned inside out and so her aspirations and dreams are not given the chance to express themselves to the reader. Secondly, Mayella is drawn sympathetically by her actions at the trial. Mayella Ewell has no knowledge of what respectfulness is. During the trial, Atticus Finch speaks to Mayella with respect. He refers to her as ? Miss Mayella.? Her understanding of politeness is opposite to what it really is. She considers it as be mocking. Mayella has never been shown respect and therefore she considers being respected as being mocked. ...read more.

Your fancy airs don’t come to nothing - your ma’amin and Miss Mayellerin’ don’t come to nothin’ Mr. Finchï¾ ” This quote shows her frustration and situation during the trial. Mayella must show anger towards Tom Robinson in order for her father not to cause her anymore harm. Mayella is in the middle of a problem larger than her. To overcome this problem she criticizes her loved one, and supports the ones that she hates. In conclusion, Mayella Ewell is a pathetic character that is shown pathos for her struggle that is revealed at the trial. Mayella deserves pathos for her endeavors in the situation that she is in. Mayella is a pathetic character in the novella To Kill A Mockingbird but is yet shown sympathy for her struggle throughout the book. ...read more.