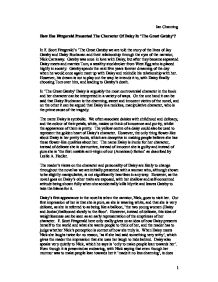 How Has Fitzgerald Presented The Character Of Daisy In 'The Great Gatsby'?

Ian Channing How Has Fitzgerald Presented The Character Of Daisy In 'The Great Gatsby'? In F. Scott Fitzgerald's 'The Great Gatsby we are told the story of the lives of Jay Gatsby and Daisy Buchanan and their relationship through the eyes of the narrator, Nick Carraway. Gatsby was once in love with Daisy, but after they became separated Daisy meets and marries Tom, a wealthy stockbroker from West Egg who is placed highly in society. Gatsby spends the next five years forever dreaming of the day when he would once again meet up with Daisy and rekindle his relationship with her. However, his dream is not to play out the way he intends it to, with Daisy finally choosing Tom over him, and leading to Gatsby's death. In 'The Great Gatsby' Daisy is arguably the most controversial character in the book and her character can be interpreted in a variety of ways. On the one hand it can be said that Daisy Buchanan is the charming, sweet and innocent victim of the novel, and on the other it can be argued that Daisy is a reckless, manipulative character, who is the prime cause of the tragedy. The name Daisy is symbolic. We often associate daisies with childhood and delicacy, and the colour of their petals, white, makes us think of innocence and purity, whilst the appearance of them is pretty. The yellow centre of a daisy could also be used to represent the golden heart of Daisy's character. However, the only thing flower-like about Daisy is her pretty looks, which are deceptive in making people believe she has these flower-like qualities about her. The name Daisy is ironic for her character, instead of delicate she is destructive, instead of innocent she is guilty and instead of pure she is 'the first notable anti-virgin of our (American) fiction' as described by Leslie A. Fiedler. ...read more.

Gatsby has dreamt about Daisy so much that he has made himself believe that she is something that she isn't, causing Daisy to become a victim as in reality she could never live up to Daisy's expectations. Leslie A. Fiedler, however, dismisses the idea that Daisy is passive and writes that Daisy is 'no longer the abused woman...but the abusing woman'. This can be seen in several ways in the book, and the most outstanding is when Daisy kills Myrtle and then drives off, allowing people to believe that it was Gatsby who killed her. Also, after letting Gatsby believe that something could happen between the two of them, and that they could start new lives together, she carelessly leaves Gatsby for Tom and does not even show up to Gatsby's funeral, apparently dismissing the fact that it was through Gatsby taking the blame that he was killed. Henry T Rennison writes that 'Daisy falls into a familiar pattern of Fitzgerald women. These women are lovely, delicate, and "romantic" - but essentially parasitic, and emotionally frigid'. If we compare Daisy with Fitzgerald's own love we can see that Daisy is representative of Fitzgerald's own wife, Zelda, and several parallels between the two characters can be drawn. Fitzgerald's love, Zelda, had refused to marry him, as he was too poor for her and she wanted financial stability. Similarly, Daisy had refused to marry Gatsby as she had said 'Rich girls don't marry poor boys'. The fact that Daisy would not marry Gatsby, as he was too poor, shows how she obviously values money more than love. Daisy is made to appear both 'lovely' and 'delicate' in the text, with her being said to be like a butterfly, but is also 'parasitic' in the fact that she lives off her husband Tom's money and in a way drains Gatsby's whole life, as his whole life is wasted trying to make himself good enough for her, but in the end never truly reaches his goal. ...read more.

We could also see Daisy as being the entire American Dream in Gatsby eyes, and not just a part of it, since the reason why Gatsby changed his name, made his large amount of money and created a new life for himself was all to get Daisy. However, Gatsby finds that money cannot buy him everything when he fails to get Daisy, even though the American Dream suggests that it could. Daisy's voice can also be seen as representing the promise of the American Dream, and in places in the novel Fitzgerald presents aspects of Daisy's character through her voice. Her voice is shown to be enthralling and seductive, similar to the promise of the American Dream, and also similar to a mythical Greek siren, enticing men to their death. The narrator, Nick, notes the tantalising musicality of Daisy's voice, saying that it is 'the kind of voice the ear follows up and down, as if the speech is an arrangement of notes that will never be played', 'I had followed the sound of it for a moment, up and down with my ear alone, before any words came through'. This suggests that there is a magical quality to her voice, making people want to listen, but that there is no real content in the sound she makes or the things she says. Nick describes her voice as having 'a clear artificial note' which reveals and represents all the artificiality of her character, and suggests that the things she says aren't necessarily the truth, but what she wants people to believe of her. Nick also memorably says that Daisy has 'a voice full of money'. This shows to the reader that Daisy appears to have everything and it shows in her character. However, it also could show to the reader how money plays a large part in her life, with her constantly talking about it to show off, and how she uses it to get whatever she wants. (need to do final point to finish essay) 1 ...read more.