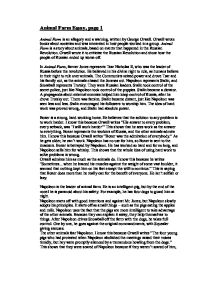 Animal Farm Essay, page 1 Animal Farm is an allegory and a warning, written by George Orwell. Orwell wrote books about societies and was interested in how people worked in a group. Animal Farm is a story about animals, based on events that happened in the Russian Revolution. Orwell wrote it to criticize the Russian Revolution and show how the people of Russian ended up worse off. In Animal Farm, farmer Jones represents Tsar Nicholas II, who was the leader of Russia before the revolution. He believed in his divine right to rule, as humans believe in their right to rule over animals. The Communists seized power and drove Tsar and his family out, as the animals chased the Joneses out. Napoleon represents Stalin, and Snowball represents Trotsky. They were Russian leaders. Stalin took control of the secret police, just like Napoleon took control of the puppies. Stalin became a dictator. A propaganda about external enemies helped him keep control of Russia, after he drove Trotsky out. ...read more.

I know this because he writes "Sometimes... when he braced his muscles against the weight of some vast boulder, it seemed that nothing kept him on his feet except the will to continue." This is saying that Boxer does more than he really can for the benefit of everyone. He isn't selfish or lazy. Napoleon is the leader of animal farm. He is an intelligent pig, but by the end of the novel he is paranoid about his safety. For example, he has four dogs to guard him at night. Napoleon starts off with good intentions and against Mr. Jones, but Napoleon slowly adopts his principles. It starts off as small things - such as the pigs eating the apples and milk. Napoleon uses the fact that the pigs are more intelligent to take advantage of the other animals. Because they can explain it away, they help themselves to things. After Napoleon drives Snowball off the farm with the dogs, he takes full control. ...read more.

He doesn't care about anyone else. Napoleon is only interested in getting the other animals hard work to benefit him. I think that Orwell is very successful at criticizing the Russian Revolution. This is because, when the pigs and humans were playing cards around the table, one of the humans said that the animals on Animal Farm worked harder and received less food; the workers started the revolution to get more, but they ended up with less. I think that writing an allegory was a good idea. It means that more people find out about the Russian Revolution - most teenagers are more likely to read a book called Animal Farm than About the Russian Revolution. By writing an allegory, more younger readers will read it, and then the future leaders and workers of the world will know about it and what happened because of it. Maybe it will stop it being repeated. I, personally, do not think that Animal Farm is a good novel. It is written well, and has achieved it's purpose, but it isn't very exciting. I like books that have action, and Animal Farm had none. ...read more.

This candidate's response does not appear very focused on the question. In fact, there is very little the candidate does to explicitly make connections between the novel 'Animal Farm' and the events of the Russian Revolution. The comparisons and critical ...

This candidate's response does not appear very focused on the question. In fact, there is very little the candidate does to explicitly make connections between the novel 'Animal Farm' and the events of the Russian Revolution. The comparisons and critical analysis of Orwell's criticism of the Russian Revolution are limited only to making simple links between which characters represent which real-life political figures (with the exception of Squealer, who isn't mentioned). I would recommend the candidate re-read the question to ensure that what they say actually has any relevance to it, because this candidate's answer has gone seriously awry.

The level of Analysis here is very poor. There is an obvious attempt at analysis, but somewhere along the long the candidate has misconstrued analysis for personal opinions and resorts to commenting on what they think about the book, rather than what is factually-founded; a lot of what they say is not based upon actual evidence as provided from the text and they resort to a subjective response frequently, meaning their answer lacks the objectivity required of effective analysis. To avoid this, I would ask the candidate to ensure they do not mention themselves in the answer, as the question does not ask for their opinion, this they should not give it. They are instructed to find links between the text and Orwell's attitude to the Russian Revolution. Though ther candidate's contextual knowledge is fair, it is not implemented into answering the question because what they say is merely listed as a series of facts rather than a coherently, flowing essay that could very easily add the odd "Orwell believed this... and so this is reflected in his use of of" in order to fortify the answer and achieve a higher grade.

The Quality of Written Communication is average. The essay is written as a long continuous line of very simplistic sentences and so the simplicity of the sentences structure limits the prowess and flair that is meant to be demonstrated by high grade students. I would also encourage a better use of more complex punctuation and vocabulary to ensure that the examiners see a confident writer who not only analyses well but presents their analysis clearly and precisely.