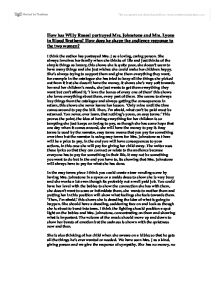 How has Willy Russell portrayed Mrs. Johnstone and Mrs. Lyons in Blood Brothers? How does he shape the audience response to the two women?

How has Willy Russel portrayed Mrs. Johnstone and Mrs. Lyons in Blood Brothers? How does he shape the audience response to the two women? I think the author has portrayed Mrs. J as a loving, caring person. She always involves her family when she thinks of life and just thinks of the simple things as luxury, this shows she is quite poor, she doesn't seem to have many things and she just wishes she could make her children happy. She's always trying to support them and give them everything they want, for example in the catalogue she has tried to keep all the things she picked out from it but she doesn't have the money, it shows she's very soft towards her and her children's needs, she just wants to get them everything they want but can't afford it, 'I love the bones of every one of them' this shows she loves everything about them, every part of them. She seems to always buy things from the catalogue and always getting the consequences in return, this shows she never learns her lesson. 'Only mine until the time comes around to pay the bill. Then, I'm afraid, what can't be paid must be returned. You never, ever learn, that nothing's yours, on easy terms.' ...read more.

Suddenly we see her pushy side when the baby is in the cot, Mrs. Lyons makes it clear that the baby is hers and that she is the mother from now on. It's even worse when we see she is firing her from her job, breaking a promise and even threatening her when she says she is going to tell someone, turning the blame to Mrs. J. We then see that Mrs. Lyons has a very dark side to her as she uses superstition against Mrs. J, knowing that, that is her weakness. In a way I can see her point of view, this is her chance to take what she's always wanted, to make her life perfect and she is never going to let it slip away since it's so close to reach for. The response he is trying to get from the audience is a hated view, that she is a very terrible person and that she is doing all she can to get what she wants regardless of other peoples feelings. The play is about a number of things. The main one being superstition. Mrs. J starts the superstition in the play by telling Mrs. L to take the new shoes off the table because it is bad luck. ...read more.

The things that the mothers have in common can be that they both share the motherly love, Mrs. J: "I love the bones of every one of them". Mrs. L: "I rush down but as I fold my arms around him, he's gone. Was he ever there at all?" They both what their child. They both want Edward, Mrs. J can't leave him and Mrs. L can't give him back. Mrs. J: "If I'm going, I'm taking him with me." Mrs. L: "He's my baby Mrs. Johnstone." They are also very different because of society; Mrs. J is very poor, has a small house and has hardly any money to pay for anything. Whereas Mrs. L has a massive house, very rich and has all the money just to give away. Also Mrs. J can't stop having children and even though she loves every one of them and would love to give them what they want, supporting them. She finds it hard to cope and has a small house to fit them all into but Mrs. Lyons on the other hand can't have even one child and has a massive house with no children able to wonder through it. Mrs. J: "If my child was raised in a palace like this one. He wouldn't have to worry where his next meal is coming from." Mrs. L: "And he'd sleep every night in a bed of his own." ...read more.