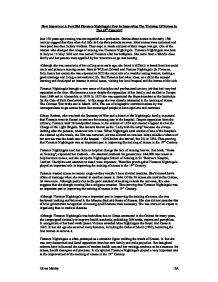 How Important A Part Did Florence Nightingale Play In Improving The Training Of Nurses In The 19th Century?

How Important A Part Did Florence Nightingale Play In Improving The Training Of Nurses In The 19th Century? Just 150 years ago nursing was not regarded as a profession. Stories about nurses in the early 19th century suggest that they often did little to help their patients recover. Most nurses were untrained and were paid less than factory workers. They slept in wards and part of their wages was gin. One of the women who changed that image of nursing was Florence Nightingale. Florence Nightingale was born in Italy on 12 May 1820 and was named Florence after her birthplace. She came from a Middle-class family and her parents were appalled by her intentions to go into nursing. Although she was conscious of her calling at an early age, she found it difficult to break from her social circle and pursue a nursing career. ...read more.

Sidney Herbert, who was both the Secretary of War and a friend of the Nightingale family, requested that Florence went to Scutari to sort out the nursing care in the hospital. Despite opposition from the military, Florence took 38 handpicked nurses in the autumn of 1854 and created a legend to rival the Charge of the Light Brigade. She became known as the "Lady with the lamp" because she always looking after the patients, whatever time it was. When Nightingale took control of one of the hospitals she cleaned up the wards, the filth was removed, air was allowed to circulate. More reliable evidence of her success was the death rate in the hospital - 42% before she arrived, but 2% in 1856. Thus proving that Florence Nightingale was an important part in improving the training of nurses in the 19th Century. ...read more.

theory of disease. She also did not consider that official government recognition of nursing qualifications were necessary. She was more of an expert in organising than in medical theories. Although Florence Nightingale was bedridden due to illness contracted in the Crimea for many years, she campaigned tirelessly to improve health standards, publishing 200 books, reports and pamphlets. In recognition of her hard work Queen Victoria awarded Miss Nightingale the Royal Red Cross in 1883. In her old age she received many honours, including the Order of Merit (1907), becoming the first woman to receive it. Florence Nightingale is often portrayed as a romantic figure walking the wards of Scutari. In fact she was very determined and faced opposition from her own family and male prejudice. Her farsighted reforms have influenced the nature of modern health care and her writings continue to be a resource for nurses, health managers and planners. In my opinion Florence Nightingale played a very important role in the improvement of the training of nurses in the 19th Century. Oliver Maltby 10A ...read more.