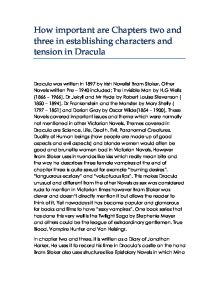 How important are Chapters two and three in establishing characters and tension in Dracula Dracula was written in 1897 by Irish Novelist Bram Stoker, Other Novels written Pre - 1940 included; The Invisible Man by H.G Wells (1866 - 1966), Dr Jekyll and Mr Hyde by Robert Louise Stevenson ( 1850 - 1894), Dr Frankenstein and the Monster by Mary Shelly ( 1797 - 1851) and Dorian Gray by Oscar Wilde(1854 - 1900). These Novels covered important issues and theme which were normally not mentioned in other Victorian Novels. Themes covered in Dracula are Science, Life, Death, Evil, Paranormal Creatures, Duality of Human beings (how people are made up of good aspects and evil aspects) and blonde women would often be good and brunette women bad in Victorian Novels. However Bram Stoker uses innuendos like kiss which really mean bite and the way he describes three female vampires at the end of chapter three is quite sexual for example "burning desires", "languorous ecstasy" and "voluptuous lips". ...read more.

On the other hand Diaries are better on informing the reader what happens and talk about little details that you don't tend to get in Epistolary Novels. Jonathan Harker and the reader are first introduced to Count Dracula in Chapter two when Jonathan (a solicitor) went to Transylvania on business for the Count. I think that Dracula has very good manors towards his guest (Jonathan) as he says "I am Dracula, and I bid you welcome Mr Harker, to my house. Come in, the night air is chill, and you must need to eat and rest." This makes Dracula sound very friendly but formal as he addresses Jonathan "Mr Harker". The word welcome is one you use towards your guest; he is being a good host thinking of the "chill". He wishes to provide food and shelter; this makes the opening greeting a positive one. However Bram stoker uses the word chill which creates very slight tension because the word "chill" is often associated with horror as it creates a spooky atmosphere and is negative. ...read more.

It gives the impression that Dracula is demonic and suffers from unimaginable anger because demons are associated with hell. He then says "deathly pale". This makes the reader think of the unliving and death. It also makes you think of blood as to be deathly pale all the blood rushes away from your face. Jonathan seems to be reserved and quiet because he says at the beginning of chapter three "let me begin with the facts, bare, meagre facts."This gives the impression that he is an educational man as you learn from facts and figures not feelings. He is reserving his feelings for himself. Bram Stoker through Jonathan creates and builds tension throughout chapters two and three by using words like "inaccessible", "accursed place", "worn and frayed" and "preternatural". This builds tension slowly as the reader does not pick up on all of these words. It is only until something unordinary and surprising that the reader fully understands and notices what is happening. In a Gothic Novel, you would expect Horror and Romances. These are the defining characters of Gothic Novels. This genre often has an atmosphere of mystery and suspense ...read more.

This essay has some excellent language analysis, makes well written and well argued points and supports all statements with a variety of appropriately selected quotations.
However the essay fall short by not discussing tension in so much detail and in its structure as the conclusion is random and inconclusive and should contain a summary of the essay and peronal opinion.
****