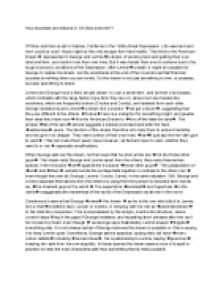 How important are dreams in "Of Mice and Men"? Of Mice and Men is set in Salinas, California in the 1930s Great Depression. Life was hard and men could be cruel. Hope might be the only escape from hard reality. This links to the American Dream? represented in George and Lennie?s dream of working hard and getting their own land and farm, and control over their own lives. But it was harder than ever to achieve due to the tough economic conditions of the Depression. After Lennie?s death, it might be possible for George to realise his dream, but the emptiness at the end of the novel shows that financial success is nothing when you are lonely. So the dream is not just something to own, or possess, but also something to share. Lennie and George have a fairly simple dream: to own a small farm, and be their own bosses, which contrasts with the large factory type farm they are on, where men are treated like machines, which are frequently broken (Crooks and Candy), and isolated from each other. ...read more.

This is emphasised by the simple, mantra-like structure, where Lennie keeps filling in the gaps if George hesitates, and repeating short phrases after him as if he knows it by heart, even though ? as George says frustratedly, Lennie always ?forgets? everything else. It is not always certain if George believes the dream is possible or if he is saying it to keep Lennie quiet. Sometimes, George seems sceptical, saying they will have ?every colour rabbits? including ?red and blue?. He is patronising to Lennie, saying ?good boy?, keeping him safe from his own stupidity. In these scenes the dream seems more of a spell or placebo to keep the main characters safe than something that is really possible. Other characters are very cynical about the dream. The reader is made to question how realistic these dreams are. Curley?s wife dreams of when she threw away the chance to become famous, but we can see that her dream is a sham. Of George and Lennie?s dream, Crooks says: ?every d**n one of them?s got a little piece of land in his head?. ...read more.

?I like soft things? Every time he kills an animal ? mouse or puppy, Lennie?s biggest, darkest fear is that he won?t be allowed ?to tend the rabbits?. The dream is so precious to him that he wants it at any cost. When Candy discovers what has happened all he wants to know is that he and George can still get the farm. He loses sight of human decency ? the woman is dead and Lennie will soon die too. Steinbeck makes us ask whether any dream of financial prosperity should be more important than human life? Should we try to get it at any cost? At the end, George tells Lennie the ?fairy story? of the dream again ? to make him happy at the moment he has to kill the dream of togetherness by shooting him in the head. He almost can?t speak because he is so upset. Even though George could still have the farm with Candy, he is deeply sad that he couldn?t keep Lennie alive. Because the dream isn?t worth much when he doesn?t have his old friend to share it with. Lennie loved the dream more than anyone and he never gets it. ...read more.