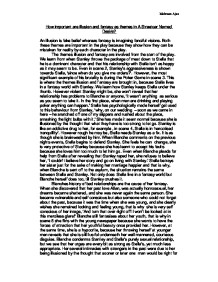 How important are illusion and fantasy as themes in A Streetcar Named Desire?

How important are illusion and fantasy as themes in A Streetcar Named Desire? An illusion is fake belief whereas fantasy is imagining fanciful visions. Both these themes are important in the play because they show how they can be mistaken for reality by each character in the play. The themes illusion and fantasy are involved from the start of the play. We learn from when Stanley throws the package of meat down to Stella that he is a dominant character and that his relationship with Stella isn't as happy as it may seem to be. Even in scene 2, Stanley's aggressiveness is shown towards Stella, 'since when do you give me orders?'. However, the most significant example of his brutality is during the Poker Game in scene 3. This is where the themes illusion and fantasy are brought in, because Stella lives in a fantasy world with Stanley. We learn how Stanley keeps Stella under the thumb. However violent Stanley might be, she won't reveal that her relationship has problems to Blanche or anyone, 'it wasn't anything as serious as you seem to take it. ...read more.

She became vulnerable and self conscious but also someone who could not forget about the past, because it was the time when she was young, and she clearly wishes she remained looking and feeling young, that is why she is very self conscious of her image, 'And turn that over-light off! I won't be looked at in this merciless glare!' Blanche still fantasises about her youth, that is why in scene 5 she flirts with the young newspaper because she wants to have the forces of attraction that her youthful beauty once provided her. However, at the same time, she is a hypocrite, because her throwing herself at younger men reveals that she is still lustful underneath her well mannered, courteous disguise. Blanche condemns Stanley and Stella's purely s****l relationship, but we see that her urges are every bit as strong as Stella's, yet much less appropriate. Her several intimacies with strangers in the past were due to her being illusioned by the thought that sooner or later one man would be right for her. ...read more.

When the polka surfaces from this point on, it signals that Blanche is remembering her greatest regret and escaping from the present reality into her fantasy world. Blanche's husband's suicide was the critical moment in her life, the moment she lost her innocence. Whereas Mitch faces his break up with Blanche with acceptance, Blanche becomes desperate and unhinged. She sees marriage as her only means of escaping her demons, so Mitch's rejection amounts to a sentence of living in her internal world. Once Mitch crushes the make-believe identity Blanche has constructed for herself, Blanche begins to descend into madness. With no audience for her lies, which Blanche admits are necessary when she tells Mitch that she hates reality and prefers "magic," Blanche begins performing for herself. Yet Blanche's escapist tendencies no longer show her need to live in a world full of pleasant bourgeois ease. Instead of fancy and desire, her new alternate reality reflects regret and death. She is alone, afraid of both the dark and the light; her own mind provides her with a last support of escape. Her fantasies control her, not the other way around, but still she shrinks from the horror of reality. Mehreen Ajaz ...read more.

This essay responds well to the question. I particularly like how there is an attempt to engage with the choice of words in the task, looking at the connotations and definitions. This is a skill that examiners particularly like, as ...

This essay responds well to the question. I particularly like how there is an attempt to engage with the choice of words in the task, looking at the connotations and definitions. This is a skill that examiners particularly like, as it means that your argument that follows is focused on the definitions given. There is a strong understanding and knowledge of the task shown here, and this is sustained through every point. However, in my opinion this essay focuses on the importance of the themes to the plot and nothing more. I would've liked to have seen some discussion of the importance to how the audience respond, and the tragic genre of the play. Such further analysis would've solidified this essay in the top band.

The analysis here is sound. I would've liked to have seen some more close textual analysis, as this essay sometimes tends to retell the story. For example the essay comments "she hates reality and prefers 'magic'" but there is no analysis of the word magic and how it relates to the question. I would be looking at how magic has direct connotations with illusions, and the facade of Blanche. I know there is a thin line between feature spotting and good analysis, but being able to pick upon Williams techniques to display fantasy and illusion is crucial before you can comment on why it is important. I would like to note that it is key that you write about the characters as Williams' constructs. This essay states "Blanches hope in a future with Mitch rests in him" giving the impression that Blanche makes her own decisions. This is not the understanding you should be giving to an examiner, and you want to write something such as "Williams has Blanche hope to live with Mitch in the future". You'll find that this naturally forces you to discuss why he chooses to do so and the effects such as "to show the significance of fantasy in her tragedy". Building this style will ensure you get the top marks for analysis.

The essay has a clear introduction, picking apart the question. However, there is no conclusion to weave the argument together. The first assessment objective in the mark scheme is nearly always the ability to structure a coherent and formal essay, and unfortunately not including a conclusion would be penalised. I would add that I am not advocating writing a conclusion for the sake of it, as they are brilliant opportunities to express a further insight on the text and offer a justified judgement. I liked how the signposts to the paragraphs here are concise and summarise the point which is to be explained. I would note that there needs to be more focus on the importance of illusion and fantasy rather than simply stating it is present.