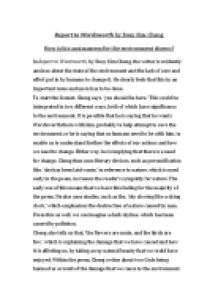 ﻿Report to Wordsworth by Boey Kim Cheng How is his anxiousness for the environment shown? In Report to Wordsworth, by Boey Kim Cheng, the writer is evidently anxious about the state of the environment and the lack of care and effort put in by humans to change it. He clearly feels that this in an important issue and more has to be done. To start the Sonnet, Cheng says, ?you should be here.? This could be interpreted in two different ways, both of which have significance to the environment. ...read more.

The early use of this means that we have this feeling for the majority of the poem. He also uses similes, such as the, ?sky slowing like a dying clock,? which emphasises the destruction of nature caused by man. From this as well, we can imagine a dark skyline, which has been caused by pollution. Cheng also tells us that, ?the flowers are mute, and the birds are few,? which is explaining the damage that we have caused and how it is affecting us, by taking away natural beauty that we could have enjoyed. ...read more.

This message continues as he says, ?Neptune lies helpless as a beached whale,? which also tells us of the damage that we are causing to wildlife around the world. Cheng starts the final two lines with, ?O,? which comes across as a sigh and implies that he may think we have passed a point where we can still save the environment. This is the first sign that he is giving up and he finishes with, ?God is labouring to utter his last cry,? which indicates that like him, God is giving up, as we have not used what he has given us wisely or carefully, so the end is nigh. ...read more.