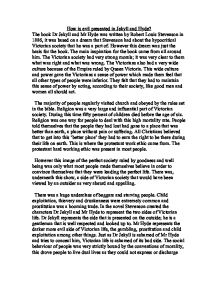 How is evil presented in Jekyll and Hyde?

How is evil presented in Jekyll and Hyde? The book Dr Jekyll and Mr Hyde was written by Robert Louis Stevenson in 1886, it was based on a dream that Stevenson had about the hypocritical Victorian society that he was a part of. However this dream was just the basis for the book. The main inspiration for the book came from all around him. The Victorian society had very strong morals; it was very clear to them what was right and what was wrong. The Victorians also had a very wide culture because of the Empire ruled by Queen Victoria. This wide culture and power gave the Victorians a sense of power which made them feel that all other types of people were inferior. They felt that they had to maintain this sense of power by acting, according to their society, like good men and women all should act. The majority of people regularly visited church and obeyed by the rules set in the bible. Religion was a very large and influential part of Victorian society. During this time fifty percent of children died before the age of six. Religion was one way for people to deal with this high mortality rate. People told themselves that the people they had lost had gone to a place that was better than earth, a place without pain or suffering. ...read more.

the darkness with not being able to see what is coming; they also associate the night time with evil because evil people are stereotypically viewed as dark mysterious people. Stevenson also uses rain and storms to present evil, "It was a wild, cold, seasonable night of March, with a pale moon, lying on her back as though the wind had tilted her," this forms an uneasy feeling among the reader and creates a basis for which the evil can work off and grow on. It does this by creating the setting for evil to happen, in people's minds, they cannot imagine anything happy, joyful or playful happening on wild stormy nights. They also cannot envisage horror and evil taking place in the middle of a bright sunny day. This feeling of suspicion and dread will be present as long as it is raining or weather is bad. Mixes of the weather are also used to intensify or relieve the feeling of evil. Stevenson uses the buildings and things around him to affect the mood of a passage. "A certain sinister block of building thrust forward its gable on the street" This gives the feeling of unease to the reader, it is a building thrust into your face, it is unusual and abnormal. Unusual things are often considered suspicious. The word "sinister" produces a mysterious and evil feeling within the reader because it is associated with all things evil. ...read more.

When he is murdering his victim Hyde is described as 'ape like', suggesting primitive behavior. This novel was written shortly after Darwin published his theory of evolution. This theory suggested that man was not created by God; in fact he evolved from apes. This, at the time of its publication was considered to be an outrageous and totally incorrect theory; it was the stereotypically view of Victorian citizens that the world was created by the hand of God and all mankind descended from Adam and Eve, the first man and woman. Victorians, from an outside view, were considered to be the most sophisticated and civilized of all mankind; however Stevenson believed that they were just as uncivilized as the rest of the world, they just hid it behind a wall of strict social conventions. He refers to Hyde being "ape-like" because he wants to show that fundamentally the Victorians were just as primitive in their behavior as all other cultures and civilizations. Stevenson has expressed and presented evil in a number of very different ways to create an effect that stimulates the readers' mind in such a way to produce a feeling of pure evil and hatred for Hyde. Although all these ways are quite dissimilar to each other they all are aimed at teaching the reader one thing, Victorian society was full of corruption and hypocrisy that lead to people living dual lives that was on one hand good and on the other evil. ...read more.