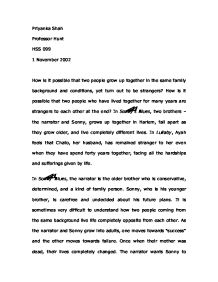 How is it possible that two people grow up together in the same family background and conditions, yet turn out to be strangers?

Priyanka Shah Professor Hunt HSS 099 1 November 2002 How is it possible that two people grow up together in the same family background and conditions, yet turn out to be strangers? How is it possible that two people who have lived together for many years are strangers to each other at the end? In Sonny's Blues, two brothers - the narrator and Sonny, grows up together in Harlem, fall apart as they grow older, and live completely different lives. In Lullaby, Ayah feels that Chato, her husband, has remained stranger to her even when they have spend forty years together, facing all the hardships and sufferings given by life. In Sonny' Blues, the narrator is the older brother who is conservative, determined, and a kind of family person. Sonny, who is his younger brother, is carefree and undecided about his future plans. It is sometimes very difficult to understand how two people coming from the same background live life completely opposite from each other. As the narrator and Sonny grow into adults, one moves towards "success" and the other moves towards failure. ...read more.

After that, whenever the two brothers met they always fought awfully. It is hard to not be able to fit into society and that is why Sonny turned to drugs for a sense of belonging. Nobody was aware about this problem until it was too late. The narrator has never been a good listener to his brother. That is what I think is the greatest factor that gives him the sense of alienation towards his brother. Sonny was always kept away from his dreams. At the end of the story, the narrator for the first time listens to his brother after all these years and tries to understand him and the sufferings he has to face all his life and tries to console him. That's when he hears him playing the piano and he ends up being proud of his brother. He becomes the important person in Sonny's life, on the way from suffering to success. They both end up happy and understanding each other much better. In Lullaby, Ayah, the old woman and her husband, Chato have lived together for forty years. ...read more.

She could not see him as a person so ill, drunk, and broken mentally from what he has faced after his sincere and loyal work toward white people. This feeling is very different from what the narrator in Sonny's Blues feels about his brother at some point in the story. Even if Ayah and the narrator in both the stories feel the sense of estrangement and alienation towards the people, so close to their hearts, it is different. The narrator and Sonny never stayed together for long when they grew up. They were always apart and different. Ayah and Chato were different in every way but they lived together all their life, they knew they had, and faced every suffering together. When Ayah sees Chato losing his strength to fight against the hard facts towards life, she feels this sense of estrangement. She has never seen Chato losing or giving up. She has always seen him facing the difficulties with courage and determination. She feels that they are old now. In Sonny's blues, both the brothers end up happily, but in Lullaby, the end is sad. Ayah has nothing to say about anything anymore. Her life has become memories. But the narrator and Sonny have a lot to do together in their life. ...read more.