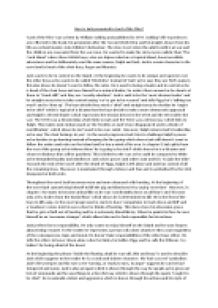 How is Jack presented in Lord of the Flies?

﻿How is Jack presented in Lord of the Flies? ?Lord of the Flies? was written by William Golding and published in 1954. Golding?s life experiences are reflected in the book, his pessimism after the Second World War and his insight, drawn from his life as a school master, into children?s behaviour. The story is set when the adult world is at war and the children are evacuated from the war zone. He wanted to make his story more realistic than ?The Coral Island? where three British boys, who are shipwrecked on a tropical island, have incredible adventures and he deliberately used the same names, Ralph and Jack. Jack is a main character in the novel and is head of the choir boys, Roger and Maurice. Jack wants to be in control on the island. At the beginning he wants to be unique and superior over the other boys as he wants to be called ?Merridew? instead of ?Jack? as he says they are ?kid?s names?, this also shows he doesn?t want to follow the rules. ...read more.

Jack seizes power and orders Sam and Eric ?to join the tribe?. Towards the end of the novel after the death of Piggy, Ralph is left alone and Jack has control of all the remaining boys. His power is maintained through violence and fear and is symbolised by the stick sharpened at both ends. Throughout the novel Jack becomes more and more obsessed with hunting. At the beginning of the novel Jack cannot bring himself to kill the pig and dismisses it by saying ?next time?. However, in chapter 3 he starts to become animal like as he was ?comfortably down on all fours? and ?his nose only a few inches from the humid floor? which shows he is determined to kill. He is the first of the boys to kill a pig. As the novel progresses he starts to have ?compulsion to track down and kill? and a ?madness? comes into his eyes when he thinks of hunting. This shows how his obsession grows that he gets a thrill out of hunting and he is extremely bloodthirsty. ...read more.

In the end the result is that Jack takes over the leadership from Ralph and tries to kill Ralph by setting a huge fire to smoke Ralph out but it is ironic as this leads to the boys being rescues as the naval officer tells Ralph ?we saw your smoke?. The conflict between them both builds tension for the reader. Golding uses the conflict between them both to represent the key theme of civilisation and savagery. Ralph represents the civilisation as he wants to have fun but knows they need rules to make them act responsibly, he also uses the ?conch? to call a meeting. The conch symbolises civilisation and authority. Jack however, represents savagery. At first he says they need rules because there not ?savages? which is ironic as he soon turns into a savage. At first his hunting fits with the civilisation but soon turns into savagery as the ?fierce exhilaration? of hunting takes over. He breaks the conch which represents the victory of savagery over civilisation and hits Piggy leading to his glasses being broken. The glasses represent reason and logic and when they are broken it symbolises the break down of rational thinking. ...read more.