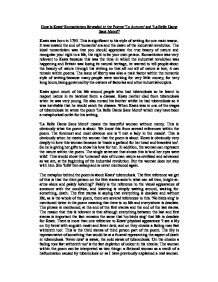 How is Keats' Romanticism Revealed in the Poems 'To Autumn' and 'La Belle Dame Sans Merci'?

How is Keats' Romanticism Revealed in the Poems 'To Autumn' and 'La Belle Dame Sans Merci'? Keats was born in 1795. This is significant to his style of writing for one main reason. It was toward the end of 'romantic' era and the dawn of the industrial revolution. The ideal romanticism was that you should appreciate the true beauty of nature and recognize your right to a life, the right to be your own person. Romanticism was very relevant to Keats because this was the time in which the industrial revolution was happening and Britain was losing its natural heritage, he wanted to tell people about the beauty of nature through his writing so that all not all of nature is lost, it can remain within poems. The issue of liberty was also a main factor within the romantic style of writing because many people were working for very little money, for very long hours, being governed by the owners of factories and other industrial outputs. Keats spent much of his life around people who had tuberculosis so he learnt to respect nature in its harshest form: a disease. ...read more.

The first stanza is saying that everything is desolate and without life, as is the whole of the poem, there are several references to this. 'No birds sing' is mentioned twice in the poem meaning that there is no life and everywhere is desolate. The phrase is mentioned; at the end of the first stanza and the end of the last stanza. The reason that this is relevant is that although everything between the last and first stanza is important the fact remains the same that 'no birds sing' that life is desolate for Keats. There is more than one reference to Keats' physical appearance 'I see a lily on thy brow with anguish moist and fever dew, and on they cheeks a fading rose fast withereth too'. This is the third stanza of third person part of the poem. The lily is representative of something that would be at a funeral representing the aspect of death in tuberculosis. 'Fever dew' is sweat, the cold sweat of tuberculosis. 'On the cheeks a fading rose fast withereth too' is the fast depletion of colour in his cheeks. ...read more.

The general feel of the poem is a laid-back and relaxed atmosphere. Keats creates this atmosphere using words like careless, sleep and soft-dying. A phrase that would sum up this feeling would be 'thou watchest the last oozings, hours by hours'. The repetition of hours conveys a feeling that there is plenty of time to be spared, also the onomatopoeic word 'oozings' adds to the effect. Both poems use the theme of romanticism in different ways. One juxtaposes love and death, le belle sans dame merci, and one shows the beauty of nature, to autumn. Keats romanticism is revealed in a number of ways. The first is the language he uses. To autumn has a laid back and relaxed feel whereas la belle sans dame merci is very negative with imagery that promotes death and illness. I think that Keats' poems are wonderfully expressive and capture a feeling or thought within a person. You are drawn into the poem with his use of language and his original style. There is no doubt as to why Keats' stood out from other poets. The two poems show Keats' ability to contrast. ?? ?? ?? ?? ...read more.