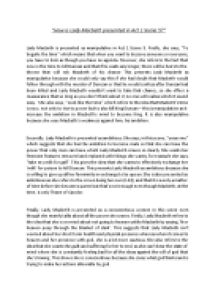 How is Lady Macbeth presented in Act 1 Scene 5

Transfer-Encoding: chunked ﻿?How is Lady Macbeth presented in Act 1 Scene 5?? Lady Macbeth is presented as manipulative in Act 1 Scene 5. Firstly, she says, ?To beguile the time? which means that when you want to deceive someone or everyone, you have to look as though you have no agenda. However, she refers to the fact that now is the time to kill Duncan and that if he waits any longer, there will be heirs to the throne that will rob Macbeth of his chance This presents Lady Macbeth as manipulative because she would only say this if she had doubt that Macbeth would follow through with the murder of Duncan or that he would confess ...read more.

It is also manipulative because she uses Macbeth?s weakness against him, his ambition. Secondly, Lady Macbeth is presented as ambitious. She says, in this scene, ?unsex me? which suggests that she has the ambition to become male so that she can have the power that only men can have which Lady Macbeth craves so dearly. She wants her feminine features removed and replaced with things she wants, for example she says, ?take my milk for gall?. This gives the idea that she wants to effectively exchange her ?milk? for poison to kill Duncan. This presents Lady Macbeth as ambitious because she is willing to give up all her femininity in exchange to be queen. ...read more.

Firstly, Lady Macbeth refers to the idea that she is worried about not going to heaven unlike Macbeth by saying, ?Nor heaven peep through the blanket of dark?. This suggests that Lady Macbeth isn?t worried about her short term health and physical presence whereas when it comes to heaven and her presence with god, she is a lot more cautious. She also refers to the idea that she wants the guilt and suffering for her to end, as she can?t bear the state of mind where she is constantly feeling bad for all the ideas against the will of god that she?s having. This shows she is conscientious because she cares what god thinks and is trying to make her actions allowable by god. ...read more.