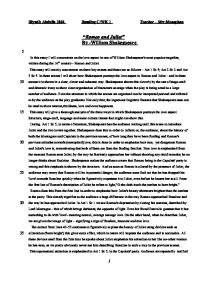 "Romeo and Juliet" By -William Shakespeare In this essay I will concentrate on the love aspect in one of William Shakespeare's most popular tragedies, written during the 16th century - Romeo and Juliet. This essay will mainly concentrate on three key scenes and these are as follows - Act 1 Sc 5; Act 2 Sc 2 and Act 3 Sc 5. In these scenes I will show how Shakespeare portrays the love aspect in Romeo and Juliet - and in these scenes it is shown in a clear, clever and coherent way. Shakespeare shows this cleverly by the use of stage-craft and dramatic irony to show clear organisation of characters on stage when the play is being acted to a large number of audience. Even the structure in which the scenes are organised can be interpreted,noticed and referred to by the audience as the play graduates. Not only this; the ingenious linguistic features that Shakespeare uses can be used to show tension,timidness, love and even happiness. This essay will give a thorough analysis of the three ways in which Shakespeare portrays the love aspect. Structure, stage-craft, language and some cultural issues that might can show this. During Act 1 Sc 5, in terms of structure, Shakespeare has the audience waiting until this scene to introduce Juliet and the two lovers together. Shakespeare does this in order to inform us, the audience, about the history of both the Montagues and Capulets in the previous scenes, of how long they have been feuding and Romeo's previous attitudes towards (unrequited) love, this is done in order to emphasise how true, yet dangerous Romeo and Juliet's love is, remembering that both of them are from the feuding families. True love is emphasised from the moment Romeo sees Juliet, by the way he fearlessly approaches her without showing any timid remarks; he no longer thinks about Roslaine. Shakespeare makes the audience aware that Romeo being in the Capulets' party is wrong and this emphasis is shown by the structure. ...read more.

'Parting is such sweet sorrow,' is irony, she is now happy to be marrying Romeo, 'sweet', yet, at the same time she is not happy that he is going to leave, 'sorrow'. After this scene, the audience have to sit through a full act - full of conflict and tragedy before they are able to see Romeo and Juliet together again at the same time. This is considering that they met in Act 2 Sc 6 where in this scene they got married. The 'structural pause' Shakespeare skilfully creates emphasises tension of what might be happening, notice how Shakespeare omits any conversation involving romance after Act 2 Sc 6; instead, the hardship that Romeo has to go through from Act 3 Sc1-5 matures him as a lover. Also this pause is effective in terms of the audience's entertainment, audience during the Elizabethan era would like to question what is going to happen to the love that is between Romeo and Juliet: and how this pause makes the the probability of them meeting again less as the play develops. This raises questions like, "Will they ever meet again." or, "Is this the end of their love." For an Elizabethan audience to ask questions such as this is very rare, this is due to the fact that audience at this time only received their entertainment by a limited source - which was the theatre, and this emphasises Shakespeare's exceptional ability at creating a changing and tensioning mood. This is emphasised by the way Shakespeare almost makes it impossible for their meeting when Romeo's claim to stay is declined and thus, being banished and told to leave Verona. Their ecstatically surprising meeting is in Act 3 Sc 5. Notice how Shakespeare split the play in to two halves - the first half introduces the main characters, Romeo and Juliet, their love and commitment and the second half of the play is where the 'disruption' starts and everything deters between the couple from this point on. ...read more.

play was written during the 16th Century, this idea may seem 'weird' in the west today and this was why Romeo and Juliet could not risk getting caught without marriage, their martial status was threatened either way, during Act 3 Sc 5 Lady Capulet wants Juliet to marry Paris (children were expected to follow their parents' commands). Obviously being put in this situation was very hard for Juliet, she loves Romeo and at the same time, she has to abide to the law, which states that she must only marry one man. All these issues in the end have threatened Romeo and Juliet's love and this can be linked to why, in the end she drank the potion that Friar Lawrence has provided her with, regardless of the consequences. To conclude my essay, throughout the key scenes of Romeo and Juliet's meeting, Shakespeare coherently tries to portray how true,pure and yet dangerous Romeo and Juliet's love really is. And as the play progresses, Shakespeare makes it easy for the audience to see the dramatic change of character that Romeo and Juliet has shown. Romeo is transformed from a traumatised teenager at the start of the play to a passionate, mature and an eager adult. This change is also portrayed in Juliet's character where she has become more independent. The audience were shown that Romeo and Juliet knew what they were doing and the potential trouble and result this may cause. Even with that they decided to continue their relationship - and by the language the audience are shown how willing they are to sacrifice their own lives for each other if something was to go wrong. And the real moral aspect of this story was that true,genuine love was not obsessive, based on appearance or self sought - true, genuine love can only be truly emphasised or portrayed by a person by their actions, and only actions - something that words cannot describe. Riyadh Abdulla 10J4 Reading C/WK 1 Teacher - Mrs Monaghan 10 ...read more.

This student has explored the play in great detail, looking closely at language, structure and social and historical issues. Outstanding quality.