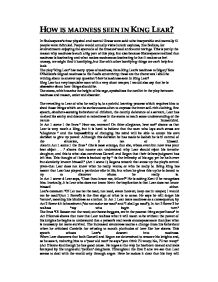 How is madness seen in King Lear?

HOW IS MADNESS SEEN IN KING LEAR? In Shakespeare's time physical and mental illness were said to be inseparable and mentally ill people were ridiculed. People would actually visits lunatic asylums, like Bedlam, for entertainment enjoying the spectacle of the inmates' mad antics and ravings. This is partly the reason why madness is such a big part of this play, but also because Shakespeare realized that madness is fascinating and what makes madness so fascinating is that It makes us feel uneasy, we might find it horrifying, but like with other horrifying things we can't help but look. The play 'King Lear' has many types of madness, from King Lear's madness to Edgar/Tom O'Bedlam's feigned madness to the Fool's eccentricity; these are the characters I shall be writing about to answer my question 'How is madness seen in King Lear? King Lear is a very impulsive man with a very short temper; I would also say that he is obsessive about how things should be. The storm, which marks the height of his rage, symbolizes the conflict in the play between madness and reason, order and disorder. The revealing to Lear of who he really is, is a painful learning process which requires him to shed those things which on the surface seem often to express the inner self- rich clothing, fine speech, obedient-seeming behaviour of children, the courtly deference of a servant, Lear has to shed his sanity and descend to nakedness in the storm to reach some understanding of the nature of humankind. ...read more.

He sees all men's punishments as a result of having daughters, as a reflection of himself, are a part of him and he is being destroyed by weapons of his own creation. The line "Is man no more than this? Consider him well." In Act 3 Scene 4 that Lear sees Tom O'Bedlam as representing the real nature of humankind: a 'Poor, bare, forked animal.' Whom he will join by tearing off his own clothing and standing naked under the storms fury. In Act 3 Scene 6 the lines "It shall be done; I will arraign them straight. Come, sit thou here most learned justicer." Are part of the mock trial of Goneril and Regan; it indicates that a desire of order and justice is starting to replace the chaos and thoughts of savage revenge in Lear's mind; so, it marks the start of his journey away from insanity. In Act 4 Scene 6, the last scene before the restoration of Lear by Cordelia, the contrasts are brought out in many ways, for instance, the use of perfect blank verse for the sane and patient lines beginning "If thou wilt weep my fortunes, take my eyes" in contrast to such manic lines as "Then kill, kill, kill, kill, kill, kill". In Act 4 Scene 7 the line "...to deal plainly, I fear I am not in my perfect mind." Ironically it is Lear's increased self-knowledge here that makes the point at which he is recovering his sanity and the change from his earlier arrogant ignorance - Lear has come to see himself for what he is and how others see him. ...read more.

I am worse than e'er I was." Shows that he is able to rejoice in his opening short soliloquy that he has reached the lowest point and that any change must be for the better. Immediately he sees his blind father, 'poorly led', regretting his offences to Edgar, and he realizes that he has not even this consolation. So long as he is alive and able to say that 'this is the worst', then it is not the worst. Edgar finds it increasingly hard to maintain the r�le of poor Tom when confronted by his father's suffering. In Act 5 Scene 3 the line "The weight of this sad time we must obey; speak what we feel, not what we ought to say." Fittingly, Edgar, the character who has done the most to unmask evil and wrongdoing throughout the play, speaks the last words of the play. Edgar has had a key r�le in revealing truth of many kinds - he has exposed the raw nature of humankind as Tom O'Bedlam and highlighted its chaos, suffering and degradation. He has punished Oswald and Edmund with death, and exposed evil to the light. In conclusion madness is shown in many different ways in the play 'The madness of King Lear'; and madness is used to show and voice many different things from it being the basis of humankind in the feigned madness in Tom O'Bedlam to it being the way to cope with loss of control in King Lear's madness to it being a way to hide vulnerability in the Fool's eccentricity. ...read more.