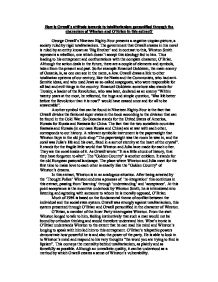 How is Orwell's attitude towards totalitarianism personified through the characters of Winston and O'Brian in this extract?

How is Orwell's attitude towards to totalitarianism personified through the characters of Winston and O'Brian in this extract? George Orwell's Nineteen Eighty-Four presents a negative utopian picture, a society ruled by rigid totalitarianism. The government that Orwell creates in his novel is ruled by an entity known as 'Big Brother' and in contrast to this, Winston Smith represents a rebellion, one which doesn't accept this ideology fed to him. Thus leading to his entrapment and confrontations with the complex character, O'Brian. Although the action deals in the future, there are a couple of elements and symbols, taken from the present and past. So for example Emanuel Goldstein, the main enemy of Oceania, is, as one can see in the name, a Jew. Orwell draws a link to other totalitarian systems of our century, like the Nazis and the Communists, who had anti-Semitic ideas, and who used Jews as so-called scapegoats, who were responsible for all bad and evil things in the country. Emanuel Goldstein somehow also stands for Trotsky, a leader of the Revolution, who was later, declared as an enemy "Within twenty years at the most, he reflected, the huge and simple question, 'Was life better before the Revolution than it is now?' would have ceased once and for all to be answerable". Another symbol that can be found in Nineteen Eighty-Four is the fact that Orwell divides the fictional super states in the book according to the division that can be found in the Cold War. So Oceania stands for the United States of America, Eurasia for Russia and Eastasia for China. The fact that the two socialistic countries Eastasia and Eurasia (in our case Russia and China) are at war with each other, corresponds to our history. A relevant symbolic instrument is the paperweight that Winston buys in the old junk-shop "The paperweight was the room he was in, and the coral was Julia's life and his own, fixed in a sort of eternity at the heart of the crystal". ...read more.

So the question arises, is it the fact that they are head of a communist state that drives these leaders to be so hated by non-communists. I believe this is the truth. The problem stems from the fact that communism and capitalism cannot survive together in peaceful coexistence, simply because they each actively undermine the principals of the other. Communism destroys the single person, and capitalism revels in it. Capitalism believes in a ridged class system, whereas communism believe everybody is equal. In this way it is impossible for there to be peace between communism and capitalism, unless there is a common enemy. An example of this is World War, when we see a united communist and capitalist front against Nazism (one may consider the n**i-Soviet non-aggression pact of 1939 as nothing more than a time winner for Stalin and Hitler). As William Blake said in his poem, 'The Human Abstract', "Mutual Fear brings Peace", and this was true of war time communism and capitalism. Fundamentally, however, there is no way that these two diametrically opposed theories can exist side by side. Even during the war, there was distrust, especially over the question of the D-Day landings. Stalin saw their long delay as a sign that the Allies wanted Nazism to destroy communism in the war. It is because of the mis-trust, suspicion and treachery that arise from having opposing cultures, that communism is a threat to the world, maybe not as strong today, but certainly prevalent for the majority of this century. (Orwell 1949 p. 9). "To dissemble your feelings, to control your face, to do what everyone else was doing, was an instinctive reaction" (Orwell 1949 p. 18). (Orwell 1949 p. 25). "Tragedy, he perceived, belonged to the ancient time, to a time when there were still privacy, love, and friendship, and when the members of a family stood by one another without needing to know the reason" (Orwell 1949 p. ...read more.

199). "In our own day they are not fighting against one another at all. The war is waged by each ruling group against its own subjects, and the object of the war is not to make or prevent conquests of territory, but to keep the structure of society intact" (Orwell 1949 p. 200). "The book fascinated him, or more exactly it reassured him. In a sense it told him nothing that was new, but that was part of the attraction. It said what he would have said, if it had been possible for him to set his scattered thoughts in order. It was the product of a mind similar to his own, but enormously more powerful, more systematic, less fear-ridden. The best books, he perceived, are those that tell you what you know already" (Orwell 1949 p. 201). "The aim of the Low, when they have an aim-for it is an abiding characteristic of the Low that they are too much crushed by drudgery to be more than intermittently conscious of anything outside their daily lives-is to abolish all distinctions and create a society in which all men shall be equal" (Orwell 1949 p. 203). "There then arose schools of thinkers who interpreted history as a cyclical process and claimed to show that inequality was the unalterable law of human life" (Orwell 1949 p. 203). (Orwell 1949 p. 205). "It had long been realized that the only secure basis for oligarchy is collectivism" (Orwell 1949 p. 207). "Reality exists in the human mind, and nowhere else" (Orwell 1949 p. 252). "We know that no one ever seizes power with the intention of relinquishing it. Power is not a means; it is an end. One does not establish a dictatorship in order to safeguard a revolution; one makes the revolution in order to establish the dictatorship" (Orwell 1949 p. 267). (Orwell 1949 p. 267). (Orwell 1949 p. 267). " 'We control matter because we control the mind. Reality is inside the skull' " (Orwell 1949 p. 300). ...read more.

Excellent. This candidate explores a variety of perspectives and interpretations, whilst avoiding a linear answer to the given question. For example, the structure of this essay was both organised and engaging; incorporating a general overview at the start, and a ...

Excellent. This candidate explores a variety of perspectives and interpretations, whilst avoiding a linear answer to the given question. For example, the structure of this essay was both organised and engaging; incorporating a general overview at the start, and a valid summary to conclude. Overall, this candidate does not lose focus on the question and has ultimately produced a thoroughly engaging response.

High. One is drawn to this candidates exploration of Winston's persona and the way he fits (or does not fit as the case may be) into Orwell's oligarchic and totalitarian society. With exploration of symbols, wider social context, and character, it is difficult to find fault. However, I would be inclined to suggest that more detailed analysis of language could improve this essay further.

Sound grammar, spelling and sentence structure here. Equally, this candidate utilises a variety of relevant vocabulary to address the complexities of the given question. With a word count of 5,832, it must be noted that this is a lengthy essay and students should be aware that this will not be expected for an exam, and often coursework (WJEC A-Level word limit is less for example).