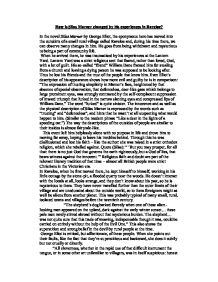 How is Silas Marner changed by his experiences in Raveloe?

How is Silas Marner changed by his experiences in Raveloe? In the novel Silas Marner by George Eliot, the eponymous hero has moved into the outskirts of a small rural village called Raveloe and, during his time there, we can observe many changes in him. He goes from being withdrawn and mysterious to being a part of community life. When he arrived there, he was traumatised by his experiences at the Lantern Yard. Lantern Yard was a strict religious sect that feared, rather than loved, God, with a lot of guilt. His so-called "friend" William Dane framed him for stealing from a church and leaving a dying parson he was supposed to be looking after. Thus he lost his friends and the trust of the people that knew him. Even Eliot's description of his appearance shows how more evil and guilty he is in comparison: "The expression of trusting simplicity in Marner's face, heightened by that absence of special observation, that defenceless, deer-like gaze which belongs to large prominent eyes, was strongly contrasted by the self-complacent suppression of inward triumph that lurked in the narrow slanting eyes and compressed lips of William Dane." The word "lurked" is quite sinister. ...read more.

E.g. "The inhabitants of Raveloe were not severely regular in their church-going..." (This is also another one of her understatements) They're inbred, ignorant of the outside world, and lazy, but she still likes them because they are essentially a friendly community, they just don't like Silas because they don't understand him. When Silas cures a woman of dropsy, and everyone starts coming to him for miracle cures, this scares him into shying away from them even more than before because they think he is possessed with magical powers. This, plus his fits, scares the people, and they begin to think he's a supernatural being who could curse them (as well as cure them) if he wanted to. "[His eyes'] dreadful stare could dart cramp, or rickets, or a wry mouth at any boy who happened to be in the rear... They had, perhaps, heard their fathers and mothers hint that Silas Marner could cure folks' rheumatism if he had a mind, and add, still more darkly, that if you could only speak the devil fair enough, he might save you the cost of a doctor." When Silas's gold is stolen, it has a huge effect on him since it is really all he's got. ...read more.

" 'You didn't know then, Eppie, when you were such a little un - you didn't know what your old father Silas felt for you.'" Eppie brings out the fathering instinct in Silas: he is eventually so devoted to her that he ends up preferring her to his gold, and would rather be poor but with her than rich and without her. "'...I thought I should be glad if I could feel it, and find it was come back. But that didn't last long. After a bit, I should have thought it was a curse come again, if it had drove you from me, for I'd got to feel the need o' your looks and your voice and the touch o' your little fingers.'" He lives for her: through her he has a reason to live again, rather than just existing soullessly, "working like the spider." George Eliot uses her to represent how children can change people's lives: "in old days there were angels who came and took men by the hand and led them away from the city of destruction. We see no white-winged angels now. But yet men are led away from threatening destruction; a hand is put into theirs, which leads them forth gently towards a calm and bright land, so that they look no more backward; and the hand may be a little child's. ...read more.