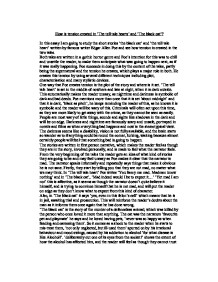 How is tension created in 'The tell tale hearts' and 'The black cat'?

How is tension created in 'The tell tale hearts' and 'The black cat'? In this essay I am going to study the short stories 'the black cat' and 'the tell tale heart' written by famous writer Edgar Allen Poe and see how tension is created in the two tales. Both tales are written in a gothic horror genre and Poe's intention for this was to chill and unsettle the reader, to make them anticipate what was going to happen next, as if it was really happening. Poe succeeds in doing this by the content of the tales, partly being the supernatural and the tension he creates, which plays a major role in both. He creates this tension by using several different techniques including plot, characterisation and many stylistic devices. One way that Poe creates tension is the plot of the story and where is it set. 'The tell tale heart' is set in the middle of nowhere and late at night, when it is dark outside. This automatically makes the reader uneasy, as nighttime and darkness is symbolic of dark and bad deeds. Poe mentions more than once that it is set 'about midnight' and that it is dark, 'black as pitch', he keeps reminding the reader of this, as he knows it is symbolic and the reader will be wary of this. Criminals will often act upon this time, as they are more likely to get away with the crime, as they cannot be seen as easily. ...read more.

He keeps referring to the eye, 'Evil Eye' so the reader is aware how much it troubles him, like he is obsessed with it, which is not the sign of a sane man. The narrator then continues to say how he carefully planned the man's murder, all the precision involved, 'I opened it- you cannot imagine how stealthily, stealthily- until, at length a simple dim ray', yet again this shows the reader that he is not normal, and will cause the reader to feel not trust his actions and to see that he is unpredictable. Most tension is built towards the end of the tale, when the police arrive and the man seems surprisingly calm. 'I smiled, - for what had I to fear?' shows us that he is mad, any normal person would be very nervous and on edge when the police came. Tension is built here, as the reader doesn't know what is going to happen, whether he will continue his act and get away with the murder, or he will trip up somehow and all will be revealed, whatever happens the reader will anxiously await. Once again we are reminded that the narrator is mad when he starts hearing a noise, 'a low, dull, quick sound' which only he could hear. Clearly he was imagining it, perhaps spurred on by a secret guilty conscience, the reader knows that he is struggling with mental instability and may feel tense as they don't know what his next actions will be, he is unpredictable, but also the reader may feel sorry for him. ...read more.

Poe's use of short sentences, commas and dashes also build up tension as they break up the story, make it easier to take in and build up the pace in which the story is read. I think that Poe's unique writing style make both the stories very affective and compliment the genre he writes to. I think that if his work were ever transferred onto screen then it wouldn't be as effective, as stories leave more to the imagination and I don't think that anyone would be able to create the same tense atmosphere as Poe does in his stories, which would discredit his name. Both the stories were written more than 100 years ago, in 1843. They are so old that when they were written no other genre of story like it was around at the time. They were original for the time they were written and set the standard for future writers. Poe invented this new genre and his writing skills and techniques form scratch and were the first chilling, gothic horror stories ever written, which adds to the reason of why they are so effective. Because no one had ever read anything like it before, and in a scense the stories were ahead of the time because of the effect they had. Poe's work is popular worldwide and still his stories of this genre appear chilling as they are written in a old style that is not used as much today, but this is effective and one knows that they would have had even more impact at the time they were written. ...read more.