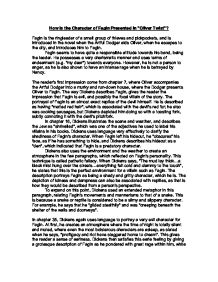 How Is the Character of Fagin Presented in

How Is the Character of Fagin Presented in "Oliver Twist"? Fagin is the ringleader of a small group of thieves and pickpockets, and is introduced in the novel when the Artful Dodger aids Oliver, when he escapes to the city, and introduces him to Fagin. Fagin seems to have quite a responsible attitude towards his band, being the leader. He possesses a very charismatic manner and uses terms of endearment (e.g. "my dear") towards everyone. However, he is not a person to anger, as he is also shown to have an intense rage when he is betrayed by Nancy. The reader's first impression come from chapter 7, where Oliver accompanies the Artful Dodger into a murky and run-down house, where the Dodger presents Oliver to Fagin. The way Dickens describes Fagin, gives the reader the impression that Fagin is evil, and possibly the focal villain of the story. The portrayal of Fagin is an almost exact replica of the devil himself. He is described as having "matted red hair", which is associated with the devil's red fur; he also was cooking sausages, but Dickens depicted him doing so with a toasting fork, subtly connoting it with the devil's pitchfork. In chapter 16, Dickens illustrates the scene and weather, and describes the Jew as "shrivelled", which was one of the adjectives he used to label his villains in his books. Dickens uses language very effectively to clarify the shadiness of Fagin's character. ...read more.

These moments were Fagin showing his true personality, that which he had hidden from the rest of the group. The real viciousness is shown when Fagin regains his composure in his voice, and tells Bill not to "be - too - violent". This coolness in his tone gives the reader the impression that is perfectly ok to be violent, and that Fagin deals with these immoral decisions frequently. Fagin has many different relationships, with varying characters, and he holds different opinions on each of them. Firstly, he had a very trusting relationship with Nancy. He praised her on numerous occasions, and called her "my dear" several times. For example, at the end of chapter 11, he says to the others, "Ah! She's a clever girl, my dears!" and once he hears that Oliver has been taken in by someone, he says to Nancy, "Nancy, my dear, I must have him found. I trust to you, my dear...for everything!" Due to the fact that he had such a trusting relationship, he was most enraged by Nancy's betrayal, and was willing to perform or spur on others such extreme measures. These facts tell the readers that Fagin is a very trusting character, once he allows someone within his inner circle. However, if he is betrayed, he becomes very animal, and can definitely be described as vengeful. Secondly his relationship with Bill Sikes is quite odd. He subtly manipulates Bill, when he speaks to him, and has the ability to frustrate him. ...read more.

Another time where Fagin's character has been portrayed by his subtle actions is when he urged Sikes to kill Nancy subliminally. When Fagin told Bill not to be too violent, they exchanged a glance at each other, and both had a "fire in the eyes". It was only after this confirmation of rage within Sikes, did he unlock the door, and let him out, like a rabid dog. At the end of the novel, Fagin is captured by the authorities, because in chapter 37, Toby Crackit asks Chitling, "when was Fagin took then?". Noah was also captured. However, another piece of evidence that Fagin had been arrested was that Noah was pardoned of his crimes because he testified against Fagin. It is also quite safe to conclude that Fagin was hung. For one, such as Fagin, in contemporary London, with the many crimes he has committed, would be executed, almost definitely by hanging. Dickens portrayal of Fagin as a Jew, tells me that contemporary prejudices were against Jews. In the eyes of Dickens and the contemporary readers and audiences, Jews were the quintessence of evil and avariciousness. The persistent reference to Fagin as "the Jew" can be seen as his negative qualities are linked to his ethnicity. Oliver Twist is a book where there is good and evil. Oliver encounters many confrontations with evil, but none so large an evil as Fagin. Dickens has made sure, through the use of language, Fagin's mannerisms, irony and contemporary prejudices, to create a character so grotesque, manipulative and immoral, that Fagin has become the epitome of sin. ...read more.