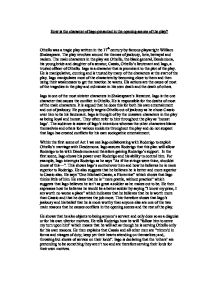 Othello was a tragic play written in the 17th century by famous playwright William Shakespeare. The play revolves around the themes of jealousy, love, betrayal and racism. The main characters in the play are Othello, the black general, Desdemona, his young bride and daughter of a senator, Cassio, Othello’s lieutenant and Iago, a trusted officer of Othello. Iago is a character that is prominent to the plot of the play. He is manipulative, cunning and is trusted by many of the characters at the start of the play. Iago manipulates most of the characters by becoming close to them and then using their weaknesses to get the reaction he wants. His actions are the cause of most of the tragedies in the play and culminate in his own death and the death of others.

Iago is one of the most sinister characters in Shakespeare’s literature. Iago is the one character that causes the conflict in Othello. He is responsible for the deaths of most of the main characters. It is argued that he does this for both his own entertainment and out of jealousy. He purposely targets Othello out of jealousy as he chose Cassio over him to be his lieutenant. Iago is thought of by the unaware characters in the play as being loyal and honest. They often refer to him throughout the play as ‘honest Iago’. The audience is aware of Iago’s intentions whereas the other characters blame themselves and others for various incidents throughout the play and do not suspect that Iago has created conflicts for his own sociopathic entertainment.

Within the first scene of Act 1 we see Iago collaborating with Roderigo to exploit Othello’s marriage with Desdemona. Iago assures Roderigo that this plan will allow Roderigo to be with Desdemona and therefore gaining Roderigo’s support.  In the first scene, Iago shows his power over Roderigo and his ability to control him. For example, Iago interrupts Roderigo as he says “As if the strings were thine, shouldst know of this—“. This shows Iago’s control over him and how he believes he is more superior to Roderigo. He also suggests that he believes he is better and more superior to Cassio also. He says “One Michael Cassio, a Florentine” which shows that Iago thinks little of him. He states that he is “mere prattle, without practice” which suggests that Iago believes he isn’t as great a soldier as he makes out to be. He then expresses how he believes he would be a better soldier by saying “I know my price, I am worth no worse a place” which indicates that he believes that he is worth more than Cassio and that he deserves the job more. This therefore shows that Iago’s jealousy and his belief that he is more worthy than anyone else are one of the two main reasons that he causes conflicts in the opening scenes and the rest of the play.

He shows that he also objects to being anyone’s servant and only does so as a disguise or for his own ulterior motives. He tells Roderigo how he will “follow him to serve my turn upon him” which means that he will act as though he is serving Othello only for his own reasons. He then explains that Cassio and all other men are “trimm’d in forms and visages of duty; keep yet their hearts attending on themselves; and, throwing but shows of service on their lords”. Iago is declaring that the ‘others’ are pretending to be something they aren’t too and are therefore serving their lords for their own motives.

In Act 1, Scene 1 Iago wakes Brabantio, Desdemona’s father, and tells him of how Othello is to be married to her. He manipulates Roderigo and convinces him to wake him as he says “make after him, poison his delight”. This would suggest that Iago enjoys making people angry and causing conflict and hatred between people as he uses the word “delight”. He says how Othello is ‘stealing away’ his daughter and declares “theives! theives! theives!” while waking Brabantio which suggests he only she’s women as objects. He then uses language such as ‘making the beast with two backs’ to tell him that they will be having intercourse to scare Brabantio. He refers to Othello as ‘the Moor’, which is a racist term. This is used to make Brabantio more concerned over the idea of his daughter marrying him. The term ‘the Moor’ also shows Iago’s hatred towards Othello, as he does not name him.

When Brabantio proceeds to arrest Othello after Rodergio and Iago’s accusations against him, Iago appears to be on the side of Othello. Shakespeare has written this as it shows at the beginning of the play how Iago plays a different person when around certain people to get what he wants and be trusted by all. He prentends that he likes Othello to Brabantio as he announces, “though I do hate him as I do hell pains, yet, for necessity of present life, I must show out a flag and sign of love”. He is telling Brabantio here that even though he is about to marry his daughter, he is still a good man. This would stop Othello accusing Iago, which is very clever.

Shakespeare portrays Iago as the typical stage villain whom manipulates and causes conflicts and hatred between people. However he is cleverer as the audience is aware of whom he truly is, whereas the characters in the play are oblivious. He directs the action in the play and cleverly plans every aspect of the disputes and accusations throughout the play. He is the most interesting character in the play so far because of this role. He ability to change who he is according to who he is talking to shows how untrustworthy he is and how he cannot be truly known by any of the characters. This proves that at this stage in the play Shakespeare is starting to show the audience how dangerous, untrustworthy and scheming he is and how it will affect the plot later on in the play.