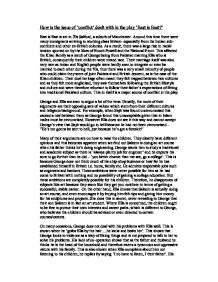 How is the issue of conflict dealt with in the play East is East?

How is the issue of 'conflict' dealt with in the play 'East is East?' East is East is set in 70s Salford, a suburb of Manchester. Around this time there were many immigrants arriving to working class Britain- especially from the Indian sub-continent and other ex-British colonies. As a result, there was a large rise in racial tension spurred on by the likes of Enoch Powell and the National Front. This affected the Khan family as a result of George being from Pakistan marring Ella who is British, consequently their children were mixed race. Their marriage itself was also very rare as Asian and English people were hardly seen to integrate or even be married to each other during the 70s, thus there was a very small minority of people who could claim they were of joint Pakistani and British descent, as is the case of the Khan children. Their dual heritage often meant they felt trapped between two cultures and as they felt more anglicised, they saw themselves following the British lifestyle and culture and were therefore reluctant to follow their father's expectations of fitting into traditional Pakistani culture. This in itself is a major source of conflict in the play. George and Ella are seen to argue a lot of the time. Usually, the roots of their arguments are their opposing sets of values which stem from their different cultures and religious background. ...read more.

This shows that George looks to violence as a way of fixing things and is not prepared to talk to her to solve his problems. His lack of co-operation shows that as the father and husband he thinks he is the head of the household and therefore exerts a tyrannous and oppressive nature with his family. This is also shown when Ella complains about him not listening to his children, he replies by saying 'I no have to listen, I their father'. His attitude also means he thinks he has the right to who and when his children will marry without consulting them, as he thinks being the father gives him an ownership of them - 'Is my decision no yours. Or b****y kid. I their b****y father, they do as I say'. His authoritarian manner and failure to compromise means that he is almost in constant conflict with his family. An important theme in the play is the conflict of cultures and values between George and his children. Tariq and his siblings are all anglicised which means they find it difficult to accept the Pakistani culture that George is forcing upon them. For example, 'It stinks of burnt bacon in here, me dad'll smell it a mile off'. Eating pork is forbidden in Islam so George would not allow it in his house. ...read more.

This suggests that despite calling Nazir 'dead' in front of everyone, he still acknowledges that he is his son and he still cares about him. Always shown as a tyrant this is the first moment of weakness seen of George. He never gets emotional over his family, almost as if this will show him with his guard down and make him compromise the control he has over them. His defensiveness in general is explained when he says 'All world 'gainst Pakistan'- he thinks that people will reject George because of his background and that his children will also be affected. This is why he always makes them aim high, and study well to make sure racial prejudice will not stop them from reaching their goals. He explains to Saleem that 'In Islam, everyone equal' which is why he wants everyone to be part of the Muslim community, however his oppressive manner makes him deeply misunderstood. Despite George's violent and tyrannical nature, it is shown that all George wants is what he thinks is the best for his children. This is shown when he says 'I no want to b****y hurt you, I love my family.' However, George is a man who is fundamentally flawed in his way of thinking given that he cannot see, for all his lecturing and espousal of Islamic values, he is himself contradicting much of what he preaches (most notably, having chosen to marry an English woman) which is the main reason for the conflict within the play. ?? ?? ?? ?? ...read more.