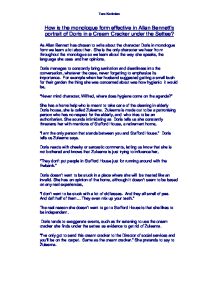 How is the monologue form effective in Allan Bennett's portrait of Dorisin a Cream Cracker under the Settee?

How is the monologue form effective in Allan Bennett's portrait of Doris in a Cream Cracker under the Settee? As Allan Bennett has chosen to write about the character Doris in monologue form we learn a lot about her. She is the only character we hear from throughout the monologue so we learn about the way she speaks, the language she uses and her opinions. Doris manages to constantly bring sanitation and cleanliness into the conversation, whatever the case, never forgetting to emphasize its importance. For example when her husband suggested getting a small bush for their garden the thing she was concerned about was how hygienic it would be, "Never mind character, Wilfred, where does hygiene come on the agenda?" She has a home help who is meant to take care of the cleaning in elderly Doris house, she is called Zuleema. Zuleema is made out to be a patronising person who has no respect for the elderly, and who tries to be an authoritarian. She sounds intimidating as Doris tells us she constantly threatens her with mentions of Stafford House, a retirement home, "I am the only person that stands between you and Stafford House." ...read more.

Same as the cream cracker." She pretends to say to Zuleema. One of the things that Doris talks about is when she miscarried John. The nurse attending to Doris wasn't sensitive or sympathetic and made the baby out to be some thing that was dirty and messy. It seems that Doris got no support from Wilfred either. "I don't think Wilfred minded." During the pregnancy, Doris must have made a tremendous effort to prepare everything (such as the pram that she talks about when she reaches a place near the door where it used to stand), so that the child could be bought up in the right sort of environment. Each thing would have to be sterilised, so it would be safe for the baby, however the midwife contradicted this by saying that the baby was dirty. "Wrapping him in newspaper as if he was dirty. He wasn't a dirty little thing" Doris may have felt the need to continue this routine of keeping everything sterile and clean as her own way of handling the situation, and become obsessed with everything being clean. ...read more.

"I don't know anybody around here now. Used to be the Marsdens... Smartish woman after them." The language that she uses is typical of an old woman, and this lets us know from the start that she old. "Ewbank... sneck... spending a penny..." Even her name 'Doris' is an old persons name, as is her husbands name 'Wilfred'. At the end of the monologue we hear from just one other person. This is the policeman that asks Doris if she is all right. She obviously is not, after falling from trying to reach a place to dust, but she convinces the policeman that she is all right. She seems to be almost committing suicide by telling the policeman not to worry. Her last words are, "Never mind. It's done with now, anyway." This could be referring to many things, telling the policeman to go away or falling from cleaning but I think that it is really about the baby that she lost. This is the central part of the monologue and remains central right up until the end where the light fades. The monologue written by Alan Benner works extremely well as we get to know Doris and understand her and her thoughts. Tara Karimian ...read more.