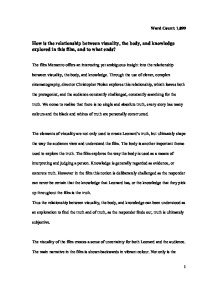 How is the relationship between visuality, the body, and knowledge explored in this film, and to what ends?

Word Count: 1,099 How is the relationship between visuality, the body, and knowledge explored in this film, and to what ends? The film Memento offers an interesting yet ambiguous insight into the relationship between visuality, the body, and knowledge. Through the use of clever, complex cinematography, director Christopher Nolan explores this relationship, which leaves both the protagonist, and the audience constantly challenged, constantly searching for the truth. We come to realize that there is no single and absolute truth, every story has many colours and the black and whites of truth are personally constructed. The elements of visuality are not only used to create Leonard's truth, but ultimately shape the way the audience view and understand the film. The body is another important theme used to explore the truth. The film explores the way the body is used as a means of interpreting and judging a person. Knowledge is generally regarded as evidence, or concrete truth. However in the film this notion is deliberately challenged as the responder can never be certain that the knowledge that Leonard has, or the knowledge that they pick up throughout the film is the truth. ...read more.

The Irish, Welsh and the lower classes were among those with protruding jaws, he argued, whereas all men of genius has less prominent jaws.1 This human misjudgement of character through appearance is not accurate but prevalent as was the case with Leonard. Leonard is a normal good-looking man. However what lies' beneath this exterior, is a psychopathic killer. In fact it is often discussed that most serial killers appear very normal often above average in features and/or charm. The characters in the film Teddy, and Natalie saw Leonard as a helpless man who could be easily controlled and manipulated. However they misjudged his character resulting in fatal consequences for Teddy as he was murdered by Leonard's hand, ultimately leading to his demise. The tattoos on Leonard's body also symbolise truth in Leonard's world, Leonard's truth. He kept his most important information tattooed on his body. This symbolized the ultimate truth in Leonard's world. This was the information that Leonard needed in order to find the man that raped and murdered his wife. However as the film progresses we learn how Leonard acquired this information which the audience understands is not the actually the truth, but it is the only truth for Leonard. ...read more.

Scott Timberg writes: "Nolan, for his part, won't tell. When asked about the film's outcome, he goes on about ambiguity and subjectivity, but insists he knows the movie's Truth -- who's good, who's bad, who can be trusted and who can't -- and insists that close viewing will reveal all."2 Is it perhaps that the movies truth is that no one is purely good or bad, nothing is black and white and trust is relative? The audience must interpret the film personally and using various notions of knowledge produces a personal truth. The film Memento offers an interesting yet ambiguous insight into the relationship between visuality, the body, and knowledge. This relationship is explored through truth, both Leonard's reality and the audiences' perception of the truth. The truth, as seen in this film is subjective and opens up the question of what is truth? Can truth be quantified and defined or is it too multifaceted? Memento challenges our notions of truth brilliantly through its post linear exploration of these questions that remain by their nature, unresolved and all the more captivating. 1 Marita Sturken and Lisa Cartwright, Practices of looking, ph 282. 2 New Times Los Angeles on March 15, 2000 1 ...read more.