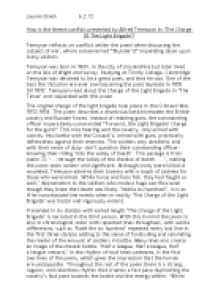 How is the theme conflict presented by Alfred Tennyson in The Charge Of The Light Brigade?

﻿Lauren Glock 6.2.12 How is the theme conflict presented by Alfred Tennyson in ?The Charge Of The Light Brigade?? Tennyson reflects on conflict within the poem when discussing the subject of war, where someone had ?Blunder?d? impending doom upon many soldiers. Tennyson was born in 1809, in the city of Lincolnshire but later lived on the Isle of Wight and Surrey. Studying at Trinity College, Cambridge Tennyson was destined to be a great poet; and that he was. One of the best the Victorian era ever saw-becoming the poet laureate in 1850 till 1892. Tennyson read about the Charge of the Light Brigade in ?The Times? and responded with this poem. The original charge of the light brigade took place in the Crimean War, 1853-1856. The poem describes a disastrous battle between the British cavalry and Russian forces. Instead of retaking guns, the commanding officer imperatively commanded ?Forward, the Light Brigade! Charge for the guns!? This miss hearing sent the cavalry, only armed with swords, into battle with the Cossack?s, armed with guns, practically defenceless against their enemies. ...read more.

Many lines also create an image of the chaotic battle. ?Half a league, Half a league, Half a league onward,? in the rhythm of hoof beat cadences, is the first two lines of the poem, which gives the impression that the horses are unstoppable. Throughout the rest of the poem there is a strong, regular, and relentless rhythm that creates a fast pace duplicating the cavalry?s fast pace towards the battle and the energy within. ?While horse and hero fell? the poem then begins to honour and praise the soldiers as the tone begins to change during the fifth stanza. Many linguistic techniques are used within the poem, such as imperative commands and direct speech ?Forward the light Brigade!? and ?Honour the charge they made!? Giving the respect to the soldiers because they had to order and obey their commander and that the reader should ?honour? them. The energy and aggression of sounds of war are also imitated with the use of onomatopoeic words like ?thunder?d? and ?Storm?d at with shot and shell? The onomatopoeic words are accompanied with alliteration emphasising the idea of ammunition flying towards the cavalry. ...read more.

This giving an image to personify Death and h**l to make them seem like monsters that the soldiers cannot escape from. I believe that Tennyson displays the theme conflict well, using many poetic devices. The poem is convincing and precise with significant interpretations of ?The Charge of the Light Brigade?. ?Pulling the heart strings? of the reader and letting their imaginations run wild with the use of imagery, great detail and onomatopoeic words in the poem. My interpretation of ?The Charge of the Light Brigade? is that it was a puerile mistake by the commanding officer that ensnared many of the cavalry?s lives. The violence featured in the Crimean war in ?The Charge of the Light Brigade? was not necessary and unjustified. Having read the poem many times; I also discovered that Tennyson doesn?t convey the brutality of the battle field, he portrays the war to be clean, maybe putting more lives at risk for the civilians that sign up because of the ?romanticism? of the poem. Unknown to the Victorian reader- the real horrors of war! ...read more.