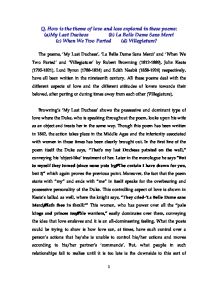 How is the theme of love and loss explored in these poems: (a)My Last Duchess, and (b) La Belle Dame Sans Merci(c) When We Two Parted (d) Villegiature?

Q. How is the theme of love and loss explored in these poems: (a)My Last Duchess (b) La Belle Dame Sans Merci (c) When We Two Parted (d) Villegiature? The poems, 'My Last Duchess', 'La Belle Dame Sans Merci' and 'When We Two Parted' and 'Villegiature' by Robert Browning (1812-1889), John Keats (1795-1821), Lord Byron (1788-1824) and Edith Nesbit (1858-1924) respectively, have all been written in the nineteenth century. All these poems deal with the different aspects of love and the different attitudes of lovers towards their beloved, after parting or during times away from each other (Villegiature). Browning's 'My Last Duchess' shows the possessive and dominant type of love where the Duke, who is speaking throughout the poem, looks upon his wife as an object and treats her in the same way. Though this poem has been written in 1842, the action takes place in the Middle Ages and the inferiority associated with women in those times has been clearly brought out. In the first line of the poem itself the Duke says, "That's my last Duchess painted on the wall," conveying his 'object-like' treatment of her. Later in the monologue he says "But to myself they turned (since none puts by/ The curtain I have drawn for you, but I)" ...read more.

But though it is talked about in all four of the poems, it is in different contexts and therefore has a slightly different meaning in each poem. In 'My Last Duchess', for example, the Duke sets certain strict conditions that any wife of his should follow, like being eternally grateful to him, being arrogant like him, and not letting merely worthless incidents please her too much, "A heart-how shall I say?-too soon made glad/Too easily impressed;she liked whate'er/She looked on,and her looks went everywhere...as if she ranked/My gift of a nine-hundred-years-old name/With anybody's gift." Images of nature have been used in describing the Duchess, "The dropping of the daylight in the West/The bought of cherries some officious fool/Broke in the orchard for her," and all these characteristics seem quite normal to the reader, while they were serious 'misdemeanours' in the eyes of the Duke. We see the same obsession around the end of the poem where the Duke says, "Notice Neptune though/Taming a sea-horse, thought a rarity/Which Claus of Innsbruck cast in bronze for me!" The fact that particular attention has been paid to this sculpture itself signifies its importance in describing the nature of the Duke. It is symbolic of his obsessive personality regarding his treatment of his wife/wives, where he 'tames' them into being what he expects them to be, again showing his obsession with an ideal wife, who, if he does not find, he will mould. ...read more.

These poems show how though love should be felt from within, one should not get carried away by the intensity of the emotions and keep one's feet planted on the ground at all times. While Byron shows us the result of illicit passion, Keats shows us the harmful effects of infatuation and when Nesbit is discussing unrealistic expectations of lovers, Browning displays the height of human emotion, jealousy and arrogance, so much so that it actually leads one to murder! In my opinion, the poem that best expresses the theme of 'love and loss' is Byron's 'When We Two Parted' as it discusses with the greatest intensity, the emotions felt by the poet after parting from his beloved. It is also written with a tone of sincerity, which is conveyed by the exquisitely lyrical quality of the words. Even though the selfish nature of the poet has been conveyed, I cannot help but sympathise with him, unlike in 'My Last Duchess', where the reader automatically disagrees with the Duke. It is a sad, touching poem and the pain that goes alongside with the sense of elation in love has been expressed in such a way that it tugs on the reader's heartstrings and leaves one thinking about the poem, even long after reading it. 1 ...read more.