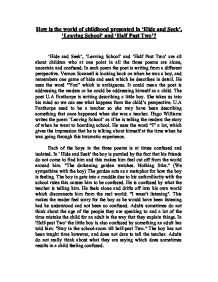 How is the world of childhood presented in 'Hide and Seek', 'Leaving School' and 'Half Past Two'?

How is the world of childhood presented in 'Hide and Seek', 'Leaving School' and 'Half Past Two'? 'Hide and Seek', 'Leaving School' and 'Half Past Two' are all about children who at one point in all the three poems are alone, uncertain and confused. In each poem the poet is writing from a different perspective. Vernon Scannell is looking back on when he was a boy, and remembers one game of hide and seek which he describes in detail. He uses the word "You" which is ambiguous. It could mean the poet is addressing the readers or he could be addressing himself as a child. The poet U.A Fanthorpe is writing describing a little boy. She takes us into his mind so we can see what happens from the child's perspective. U.A Fanthorpe used to be a teacher so she may have been describing something that once happened when she was a teacher. Hugo Williams writes the poem 'Leaving School' as if he is telling the readers the story of when he went to boarding school. ...read more.

At the beginning of 'Leaving School' the boy is exited and looking forward to going to his new school "I thought it was going to be fun". In the middle of the poem we then see the boys exiting dream becomes more of a nightmare as he begins to feel upset, puzzled and unhappy. Also the beginning of 'Hide and Seek' the boy is happy and exited about the game he is playing. "Call out. Call loud: 'I'm ready! Come and find me!" The use of exclamation marks shows the excitement of the boy and how he is felling, the effect of this is that the feeling of the poem is enjoyable to read. By the end he is upset and disappointed as he thought he had won the game but found out that his friends had in fact stopped playing. The beginning of 'Half-past Two' starts off in a serious mood. "He did Something Very Wrong" the use of capital letters show's that the tone of voice was a serious one. ...read more.

This gives the reader a better understanding of how the child sees time in comparison to the way adults see time. 'Leaving School' does not really use such childlike language but you still understand how the child is feeling. The poet in 'Leaving School' is looking back on his childhood but that is why the poem does not use such child like language, the boy is also older in this poem then the other two poems 'Half-past Two' and 'Hide and Seek'. The three poems all deal with the different types of fantasies that children have in different situations. In 'Leaving School' the boy becomes rapped up in a fantasy of confusion and becomes distant from the world around him. 'Half-past Two' shows the child in a timeless fantasy, where he forgets time and its constraints. 'Hide and Seek' presents the child in a strange fantasy, he vividly imagines the smell and feel of the scenery. The three poets being adults contrast themselves with the children in the poems. They show the actions of the adults and the reactions of the children. ...read more.