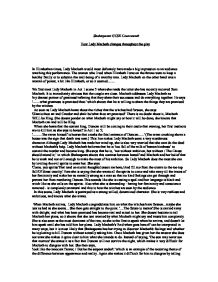 How Lady Macbeth changes throughout the play

Shakespeare GCSE Coursework How Lady Macbeth changes throughout the play In Elizabethan times, Lady Macbeth would most definately have made a big impression to an audience watching this performance. The women who lived when Elizabeth I was on the throne were to keep a healthy family or to substain the well-being of a wealthy man. Lady Macbeth on the other hand was a woman of power, a bit like Elizabeth, or so it seemed........ We first meet Lady Macbeth in Act 1 scene 5 where she reads the letter she has recently recieved from Macbeth. It is immediately obvious that the couple are close. Macbeth addresses Lady Macbeth as 'my dearest partner of greatness' referring that they share their successes and do everything together. He says '........what greatness is promised thee.' which shows that he is willing to share the things they are promised by the witches. As soon as Lady Macbeth hears about the riches that the witches had forseen, she says 'Glamis thou art and Cawdor and shalt be/what thou art promised' There is no doubt about it, Macbeth WILL be King. She doesnt ponder on what Macbeth might say or how it will be done, she knows that Macbeth can and will be King. When she hears that the current king, Duncan will be coming to their castle that evening, her first instincts are to kill him as she says to herself in Act 1 sc 5; '..........The raven himself is hoarse that croaks the fatal entrance of Duncan......' (The raven croaking above a house was the sign that death was near.) This line makes Lady Macbeth seem a very murderous character.Although Lady Macbeth has made her mind up, she is also very worried that she cant do the deed without Macbeth's help. Lady Macbeth believes that he is 'too full of the milk of human kindness' to commit the murder and become king. ...read more.

Lady Macbeth although she seems evil, is actually a loving wife. She cares what Macbeth feels after he has killed Duncan, and stays with him as he washes his hands, instead of leaving to go to bed. They go together. Shakespeare has portrayed the two of them to be totally dependent upon one another and to complement each other perfectly. After the murder of Duncan has been committed, it is Lady Macbeth who tries to convince the remorseful and ashamed Macbeth that 'what's done cannot be undone' and that there is no need to feel guilt. She says, 'These deeds must not be thought/After these ways; so it will make us mad.' She is uneasy and tense and is worried when Macbeth says that he thinks he has heard voices but she hides this concern and takes control of the situation, trying once again to spur Macbeth on and taunt him with suggestions that he is weak and unmanly. She says, 'You do unbend your noble strength to think/So brainsickly of things' and calls him 'infirm of purpose'. It is vital that one of them remains in control and even though she is anxious herself, it is Lady Macbeth. She is the collected one of the pair and the one able to conceal her feelings and keep her calm. The first turning point of the relationship comes in Act Two Scene Two when Lady Macbeth asks Macbeth to do the deed of killing Duncan. She says, 'Had he not resembled/my father as he slept, I had done't.'. This is the first indication Shakespeare gives that Lady Macbeth has a conscience and is not pure evil. The morning after the murder, Lady Macbeth performs her eye-catching faint. This is either because she is actually quite nervous now that everyone has found out that the king has been brutally murdered, and is finding all the accusations quite hard to take in or is trying to get the attention on her. ...read more.

At the start, she is a single-minded, strong character and uses strong, clear,emphatic language. Definately the stronger of the two, her ideas are focused unlike Macbeth. She has a very masculine side to her character in some ways. She bemoans the fact that she is a woman; 'unsex me here...' and wishes for 'direst cruelty' to help her towards her goal. Lady Macbeth knows that Macbeth isnt very strong minded so she is very critical of him all the way through the play, but not nastily. She treats him like a child as if its a motherly instinct she has picked up, which shows her more feminine side, and helps Macbeth murder Duncan for ambition and for her husband instead of just for her. Lady Macbeth is also a good actress, welcoming Duncan and concealing her feelings. Most importantly, she is always in control. After the murder, her character starts to change, becoming tense and uneasy, as if she has finally realised what her ambition has done. Once Macbeth is King, Lady Macbeth starts to adopt a less dominant role as if she has swapped roles with her husband.Her language reflects this when she asks to speak to Macbeth instead of just walking in on his privacy. She seems a little unsure of herself and has doubts about their relationship. She is still supportive though, as shown when Macbeth sees Banquos ghost at the banquet. She still seems anxious as she makes excuses for his behaviour, saying he has had fits like this ever since he was young. Lady Macbeth is more caring towards Macbeth through this scene, but still taunts him about his masculinity. Her character starts to deteriorate with the sleepwalking scene and she begins to lose her reason, with disjointed ideas and speech. She is apparently now haunted by guilt where before she was prepared to commit murder. She may be afraid that Macbeth doesn't need her and this adds to her insecurity. Now that her ambition fo her husband has been forfilled, she feels unwanted and alone. She is in effect incomplete without him, and drives herself to suicide. ...read more.