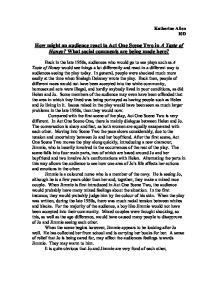 How might an audience react to Act One Scene Two in A Taste of Honey? What social comments are being made here?

Katherine Allen 10D How might an audience react to Act One Scene Two in A Taste of Honey? What social comments are being made here? Back in the late 1950s, audiences who would go to see plays such as A Taste of Honey would see things a lot differently and react in a different way to audiences seeing the play today. In general, people were shocked much more easily at the time when Shelagh Delaney wrote the play. Back then, people of different races would not have been accepted into the white community, homosexual acts were illegal, and hardly anybody lived in poor conditions, as did Helen and Jo. Some members of the audience may even have been offended that the area in which they lived was being portrayed as having people such as Helen and Jo living in it. Issues raised in the play would have been seen as much larger problems in the late 1950s, than they would now. Compared with the first scene of the play, Act One Scene Two is very different. In Act One Scene One, there is mainly dialogue between Helen and Jo. The conversation is sharp and fast, as both women are equally exasperated with each other. Moving into Scene Two the pace slows considerably, due to the tension and uncertainty between Jo and her boyfriend. ...read more.

We meet Jimmie again later on in the scene. Again, he is looking after Jo well. He gives her milk as a "cold cure" and is concerned about her health. This is, however, the last time Jimmie appears in the play, for he is going away with the navy. He promises Jo, "I will come back, I love you." The audience may still be in two minds about Jimmie. Those who have come to trust him throughout the scene may believe the he really will return to Jo one day. Those who still have bad feelings towards him, despite his caring attitude, may believe that Jimmie will not keep to his promise, and that it will be the last Jo hears of him. Alternating with these two parts of the scene are Jo's confrontations with her mother. After Jimmie has given the ring to Jo, she ties it around her neck. She makes excuses for doing so, "...it's too big, look, it slides about...And I couldn't wear it for school anyway. I might lose it." It may be thought by the audience, however, that Jo's real reasons for doing this are to stop Helen seeing the ring. When she goes back to the flat, Jo tells Helen about Jimmie except for two things; that they are engaged and that Jimmie is black. ...read more.

Helen's reaction would also make her seem quite hypocritical, seeing as she herself has been married before, and is marrying again now. Throughout their argument, however, bursts of Helen's concern for Jo do come out, "Oh Jo, you're only a kid. Why don't you learn from my mistakes?" From these bouts of real feeling, the audience would possibly conclude that Helen is not wholly uncaring. As Helen calms down after discovering Jo's secret, Jo, out of the blue, asks about her father. Helen tells her that he wasn't very bright, and, under further pressure from Jo, continues to say that, "He wasn't an idiot, just a bit - retarded." This comment upsets Jo, and she worries that her father's genes are hereditary. Helen assures Jo that she is definitely not "daft," again showing her more sensitive side. She then hurries off to her wedding, and the scene closes. Many problems are introduced during the scene, hardly any of which are resolved. This is also the same for the whole play, as there appears to be no closure for Jo. There are many aspects of Act One Scene Two, which are included purely in an attempt to shock the audience of that time, for example Jimmie's race, and Jo and Helen's living conditions. Alternatively, Shelagh Delaney may have written about such scenarios to try to alert members of the audience as to what really does go on around them. ...read more.