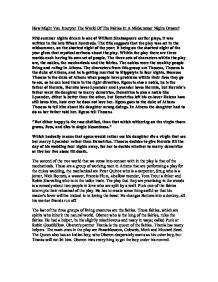 How Might You Interpret The World Of The Fairies In A Midsummer Nights Dream?

How Might You Interpret The World Of The Fairies In A Midsummer Nights Dream? Mid summer nights dream is one of William Shakespeare earlier plays, it was written in the late fifteen hundreds. The title suggests that the play was set in the midsummer, on the shortest night of the year; it being on the shortest night of the year gives that mystical eeriness about the play. Within the play there are three worlds each having its own set of people. The three sets of characters within the play are, the nobles, the mechanicals and the fairies. The nobles were the wealthy people living and ruling in Athens. The characters from this group are Theseus, Theseus is the duke of Athens, and he is getting married to Hippolyta in four nights. Because Theseus is the duke of Athens when people have problems within their lives they go to see, so he can lead them in the right direction. Egeus is also a noble, he is the father of Hermia, Hermia loves Lysander and Lysander loves Hermia, but Hermia's father want his daughter to marry demetrius, Demetrius is also a noble like Lysander, either is better than the other, but Demetrius left his ex-lover Helena how still loves him, how ever he does not love her. Egeus goes to the duke of Athens Theseus to tell him about his daughter wrong doings. In Athens the daughter had to do as her father told her. Egeus tell Theseus "But either happy is the rose distilled, than that which withering on the virgin thorn grows, lives, and dies in single blessedness." Which basically means that egeus would rather see his daughter die a virgin that see her marry Lysander rather than Demetrius. Theseus decides to give Hermia till the day of his wedding four nights away, for her to decide whether to marry demetrius or live her live alone till death. ...read more.

When under her husbands love spell her scenes with bottom, the donkey, are sensual, caring and comic. She too is active in the mortal world. At the end of the play both Oberon and Titania settle their dispute and are reunited as lovers. This gives the play a sense of completeness. Finally there is Puck Oberon's mischievous servant. He loves to play pranks on humans. He is not very reliable or efficient at carrying out his tasks. For example when he confuses the four lovers and puts the love potion on the wrong lover. Puck never seems to feel regret when he carries out his pranks. His character is based on a traditional folklore figure called Robin Goodfellow. In performance Puck is presented in many different ways. Often a very physical character, with mime as important as speech. He is also often played in a 'naughty school boy' style. These three characters are some times mirrored into the world of Athens. The actors who play Oberon and Titania also play Theseus and Hippolita. And Puck is mirrored as Theseus's servant. Shakespeares Love "The course of true love never did run smooth." (Shakespeare, 1993, pg. 15) Throughout Shakespeare's plays and sonnets, he always seems to describe love as uncontrollable and confusing. In A Midsummer Nights Dream, Shakespeare makes two Athenian youths fight for the love the have for one another. In The Odyssey, Homer portrays an epic about a man who gets lost at sea hoping to one day return to see his love. Both characters fight for their love and do the impossible in order to conquer it. Although in the way, they encounter many bumps in the road, but after that, its all smooth sailing; the course of love, never really could run smoothly. In A Midsummer Night's dream, Shakespeare really portrays his beliefs in love throughout the mayhem in each of his character's lives. ...read more.

When lost at sea, Odysseus encounters many women in which he has love affairs with, yet, After going through all these women, Odysseus still retains Penelope's, his wife, love within him. At the same time, in the palace, Penelope is being courted by many suitors wanting to marry her and takeover the palace believing that Odysseus is already dead. Penelope's love is still strong while she retains the suitors from marrying her and destroying her kingdom. The course of love between these two lovers, didn't run smoothly because the plan was for Odysseus to return home from the Trojan war safe and alive right away, instead, he ended up not coming home until twenty years later. Their love has strong and held together during those years while it was tested many times. The course of love between Penelope and Odysseus ran its course and they ended up together. In this case, their story is exactly what Shakespeare describes in all his sonnets and his plays. Although they have been through some tough times, in the end, they ended up together and in love once again. In the end of A Midsummer Night Dream, Helena ends up with Demetrius, and Hermia with Lysander just as planned. The path love had to take to get there never ran smoothly. Both Odysseus and the characters Shakespeare creates, have troubles with love and encounter new challenges that may be overcome by love; both succeed. Just as Odysseus and Penelope, Lysander and Hermia had to run away into to woods to keep their love together; Odysseus struggles to stay alive to see his love once again. Both couples of lovers struggle together in order to be able to be together and in love; it was rough, but love got them through it. They realize what love has gotten them thru; and know that their love is true and real. Between Shakespeare and Odysseus, they both send one great message: the road of love has its bumps at first, but after one gets the hang of it, the road becomes smooth. ...read more.