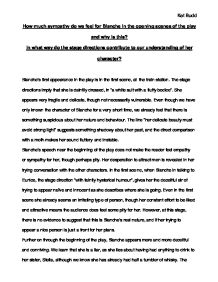 How much sympathy do we feel for Blanche in the opening scenes of the play and why is this?

Kat Budd How much sympathy do we feel for Blanche in the opening scenes of the play and why is this? In what way do the stage directions contribute to our understanding of her character? Blanche's first appearance in the play is in the first scene, at the train station. The stage directions imply that she is daintily dressed, in "a white suit with a fluffy bodice". She appears very fragile and delicate, though not necessarily vulnerable. Even though we have only known the character of Blanche for a very short time, we already feel that there is something suspicious about her nature and behaviour. The line "her delicate beauty must avoid strong light" suggests something shadowy about her past, and the direct comparison with a moth makes her sound fluttery and instable. ...read more.

Further on through the beginning of the play, Blanche appears more and more deceitful and conniving. We learn that she is a liar, as she lies about having had anything to drink to her sister, Stella, although we know she has already had half a tumbler of whisky. The audience begins to wonder if she has something to hide and if she has a plan, and indeed the stage directions when she is alone differ greatly to those of when she is in the company of others. When she is waiting for Stella to return, the direction says she sits "hunched, with her legs pressed close together and her hands tightly clutching her purse as if she were quite cold". ...read more.

Her line "I'm not young and vulnerable any more. But my young husband was" suggests that something happened in her past which hurt her. Her pretence of being so pure and defenceless is destroyed when she says that she is not. Her presence in the play is one of constant flirtation with typical male characters. When Stanley is unresponsive to her advances, she moves onto Mitch, an unmarried man who we know lives with his mother and has a more sensitive side to him than some of the other males in the play. This is the type of man Blanche needs, as she is genuinely shocked by the violence in Stella and Stanley's relationship, and craves attention and kindness. The opening scenes of the play contribute much to the pity we feel for Blanche and her insecurities, but do not generate much sympathy for her character and the way she behaves. ...read more.

This essay engages well with the task, making a clear argument that we should not feel much sympathy for Blanche throughout. This is made clear by a breadth of points, ranging from her appearance on stage, the language used and ...

This essay engages well with the task, making a clear argument that we should not feel much sympathy for Blanche throughout. This is made clear by a breadth of points, ranging from her appearance on stage, the language used and Williams' construction of her character. By using a range of points, this essay remains strong throughout and there is always a clear focus on the techniques Williams uses to question the audience's sympathy for her.

The analysis in this essay is strong. Quotes are embedded well and so allow the argument to flow. What I particularly liked was the focus on the effect of the technique, for example "the audience begins to wonder if she has something to hide and if she has a plan" shows a clear awareness of Williams construction of dramatic impact. Language is analysed well, with Blanche's speech and phrases being closely explored to show her complications. I liked how there is a paragraph dedicated to her looks, as this gives a strong understanding of the significance of stage presence. Too often essays ignore the context of a play, and don't analyse what the audience see. By showing how Blanche is depicted as an outsider, it is clear this essay understands why the audience don't feel sympathy. I do have a query with this essay, with it referencing the characters as if they choose their own actions. It is vital that you discuss Williams' constructions, as this allows analysis and a perceptive debate about why he chooses such techniques. This is missing in this essay - there is exploration of why the audience feel sympathy for Blanche, but no discussion of why Williams induces this sympathy. If I was doing this essay, I would be discussing how this lack of sympathy may not make her seem like a tragic protagonist.

The essay lacks an introduction, which I feel would be useful here. A strong introduction, defining sympathy and the techniques Williams uses in the first paragraph, would set up a sharp argument. There is a conclusion, but it does not draw upon the significance of the lack of sympathy Williams has created! Spelling, punctuation and grammar are fine.