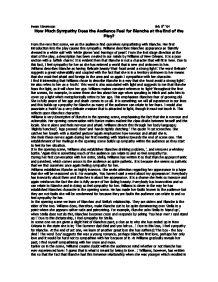 How Much Sympathy Does the Audience Feel for Blanche at the End of the Play?

How Much Sympathy Does the Audience Feel for Blanche at the End of the Play? From the very first scene, we as the audience find ourselves sympathising with Blanche. Her first introduction into the play causes this sympathy. Williams describes Blanches appearance as 'daintily dressed in a white suit' with 'white gloves' and 'earrings of pearl'. From the first stage direction at the start of the play, a description has been created in our minds by Williams of New Orleans. It is a poor section with a 'raffish charm'. It is evident then that Blanche is not a character that will fit in here. Due to this fact, I feel sympathy for her as she has entered a world that is new and unknown to her. Williams describes Blanche as having 'delicate beauty' that 'must avoid a strong light'. The word 'delicate' suggests a great vulnerability and coupled with the fact that she is in a territory unknown to her means that she must feel afraid and foreign to the area and so again I sympathise with her character. I find it interesting that Williams chose to describe Blanche in a way that she 'must avoid a strong light'. He also refers to her as a 'moth'. This word is also associated with light and suggests to me that Blanche fears the light, as it will show her age. ...read more.

Due to this loss, I feel sympathy for Blanche. At the end of act one, we learn of another great loss she has suffered; 'The boy - the boy died'. The word 'boy' suggests this was a young romance, perhaps Blanches first love, perhaps her only love and it would be hard not to sympathise with her because of it. As Williams gradually reveals her past, I find myself sympathising with her more and more. Earlier on in the scene, Williams creates doubt within the audiences mind whether or not Blanche has ever experienced love: 'I guess that is what is meant by being in love...'. Williams, however, has written this so that the fact that Blanche had this immense relationship when she was younger which resulted in tragic circumstances comes as so much more of a shock to the audience. Due to this greater impact, the audience find themselves sympathising with her a lot more. Williams establishes Blanche as a character who cannot 'be alone'. She has 'got to be with somebody'. Many people can relate to this, as loneliness can be an awful thing to live with and so sympathise with her in that way. Throughout the first five scenes, Williams uses music such as 'the blue piano' to great effect. Te music is heard when emotions run high, particularly in the case of Blanche. ...read more.

She cannot 'go there on a rocket'; she must stay and face the imminent disaster she predicts. This reinforces the idea of fate established in the title 'A streetcar named desire'. Blanche is on this set destination leading to disaster and there is nothing she can do to stop it. Williams does, therefore, create great feelings of sympathy for Blanche within the audience. Blanche 'wants Mitch' so that she can 'breathe quietly again'. This again makes you feel sympathy for Blanche as Stella has a man in her life yet she does not and she is the oldest. This sympathy is, however, shattered by the fact that she risks losing Mitch by flirting with a 'young man' at the end of scene five. This could, however, be a sign of her insecurities once again. She needs to feel desired to boost her confidence with Mitch, though she goes about gaining this desire the wrong way. Mitch is her rescue boat from Stanley and her life alone. You must feel sympathy for Blanche as her life is on a course of destruction and no matter how hard she tries, she always ends up worse off than before. Williams cleverly uses metaphors to make certain points, for example, in scene five he writes, 'It foams over and spills. Blanche gives a piercing cry'. When he speaks of the drink foaming over I, personally, believe that he metaphorically is referring to the tension in the house. The tension is becoming too much for Blanche and she cannot control it. Ewan Stevenson feb 5th '04 ...read more.