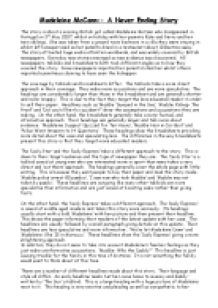 How Newspapers Reported the Story of Madeleine McCann

﻿Madeleine McCann:- A Never Ending Story The story is about a missing British girl called Madeleine McCann who disappeared in Portugal on 3rd May 2007, whilst on holiday with her parents Kate and Gerry and her twin siblings. She was taken from a ground room bedroom in a villa they were staying in whilst left unsupervised as her parents dined in a restaurant about 120metres away. The story attracted huge media attention worldwide, and was widely covered by British newspapers. Everyday new stories emerged as new evidence was discovered. All newspapers, tabloids and broadsheets both took different angles as to how they covered the story. Some newspapers reported her parents killed her whilst others reported eyewitness claiming to have seen the kidnapper. The coverage by tabloids and broadsheets differ. The tabloids take a more direct approach in their coverage. They make more accusations and are more speculative. The headings are considerably larger than those in the broadsheet and are generally shorter and more ?snappy?. This is due to the fact they target the less educated reader in order to sell their paper. Headlines such as ?Maddie ?Dumped in the Sea?, ?Maddie Kidnap: The Proof? and ?Did you kill her by accident?? show the assumptions and accusations they are making. ...read more.

It shows the parents standing; crying in despair at the fact their ?baby? has been kidnapped. It is very emotive. Another headline written by ?The Daily Mirror?, ?We?re not returning without our Madeleine? shows a very strong defiant message from her parents. It shows they are committed to finding their little girl and will not give up. The fact they are in another country shows how dedicated they are to getting her back. There is picture of her parents walking hand in hand which shows they are being strong and devoted, and are in this together. It shows they will not quit in their search. The front cover has a smaller picture of Madeleine in a circle, which is used to get her face into the public?s eyes and get them very much aware of her disappearance. A third headline written by the ?The Daily Express? makes a bold claim. ??Syringe found in Madeleine?s apartment??. This is a very outgoing claim. It takes up the majority of the front cover. The fact that it mentions a ?syringe? being found in Madeleine apartment shows the possibility that she may have been drugged and killed as opposed to being kidnapped and this is picked up by the sub heading which says ?Parents anger at new claims they drugged her?. ...read more.

I believe the newspapers have used this opportunity to make money and should not make up stories around a very sensitive case. I think they went over the top and were carried away and didn?t realise they were hurting the McCann?s feelings. In a way, I think they must have influenced the justice system, as everyone would have read the headlines at least, if not read the story and that would have played a part in the way the case was handled. I believe there should be tighter controls on what is allowed to be published as people?s feelings are being hurt and people are being wrongly influenced. Overall, I think there were some very good reporting especially at the beginning of the case when Madeleine?s disappearance was being publicised. Her disappearance took up the whole front page and her picture dominated all the newspapers to get people aware of her and look out for her. However as the story went on I think the media went over the top and just got carried away. There were several false stories and many contradicted each other, such as one said she was dead and the other said a rich Arab family took her. This was obviously false and unacceptable. I think the media over-exaggerated and tighter controls should be in place to stop this as people are being hurt. ...read more.