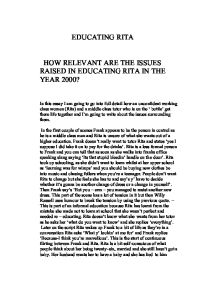 How Relevant Are the Issues Raised In Educating Rita In the Year 2000?

EDUCATING RITA HOW RELEVANT ARE THE ISSUES RAISED IN EDUCATING RITA IN THE YEAR 2000? In this essay I am going to go into full detail how an unconfident working class women (Rita) and a middle class tutor who is on the ' bottle' get there life together and I'm going to write about the issues surrounding them. In the first couple of scenes Frank appears to be the person in control as he is a middle class man and Rita is unsure of what she wants out of a higher education. Frank doesn't really want to tutor Rita and states 'yes I suppose I did take it on to pay for the drinks'. Rita is a less formal person to Frank and you can tell that as soon as she walks into franks office speaking slang saying 'Its that stupid bleedin' handle on the door'. Rita took up schooling, as she didn't want to learn whilst at her upper school as 'learning was for wimps' and you should be buying new clothes be into music and chasing fellers when you're a teenager. ...read more.

Her husband wants her to have a baby and she has lied to him saying she has come off the pill but she hasn't. She states 'I don't wanna baby yet. See I wanna discover meself first'. I think this is part of the changing role in society because in the twenty first century you wouldn't expect that married twenty-six year old women should certainly have a child. Frank is low in confidence and believes he's not the right tutor for Rita because he says 'I'm actually an appalling teacher' and then says 'appalling teaching is quite in order for most of my appalling students' he then says' you want a lot and I can't give it'. Coming towards the end of the second scene the fist bit of noticeable flirting starts when frank says 'Right now there's a thousand things I'd rather do than teach; most of them with you, young lady'. Then Frank asks why didn't you walk in here twenty years ago?' This is the start of continuous flirting from Frank. ...read more.

Frank tells her she can't go because of her exams even though her exams are before Christmas. Rita try's to change her dress style and the ways she speaks to a more posh way just like her new flat mate. Frank feels that he and Rita are drifting away and turns to the 'bottle'. At the point Tyson is the centre of jealousy and Frank doesn't want Rita to change. Rita's new flat mate then commits suicide and Rita realises she wasn't so special and realises there's no reason why she would want to be like her. Rita then takes her exam and says 'I never thought there was anythin' I could give you anything. But there is' Rita then gives frank a haircut and the story is over. The end of the story is left open, which is a good ending because it lets you give your own opinion on what happened after the story finished. I think Willy Russell used romance in the story to get the audiences attention because even though nothing serious happened between the two it just kept you reading to see if anything did. Willy Russell used many techniques to get the audiences attention such as humour, and sarcasm. ...read more.